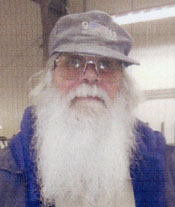 Harold L. Samuels, 64, passed away of liver cancer at 5:50 a.m. on Saturday, January 20, 2018 at St. Joseph Regional Medical Center- Mishawaka.
Harold was born on October 3, 1953 in Plymouth, Indiana to Tommy Samuels and Dorothy O. Thomas.
In Plymouth on August 25, 1973, Harold married the former Carrie L. Peterson.
He joined the Army National Guard and was Honorably Discharged on November 8, 1978.
Harold worked for U.S. Granules for 38 years. He then most recently, before his semi-retirement on January 1, 2017, worked for the former Charleston Corporation in Bremen.
He was a very outgoing person and loved going camping and being outdoors.
Harold is survived by his wife of 44 years, Carrie of Bremen, and their children: Care (Efrain) Sanchez of Bremen, Harold (Jessica) Samuels Jr. of Walkerton, Melinda Diaz of Bremen and Carman (Humberto) Gonzalez of Bremen; his mother, Dorothy Thomas of Plymouth; 9 grandchildren: Antonio, Humberto Jr., Isaiah, Lucio, Harold III, Erika, Richard, Alex and Louise; and siblings: Chuck (Suzanne) Wallick, Gary Wallick, Tena Guard, Debra (Scott) Woodward and Wayne (Jennifer) Samuels.
He was preceded in death by his father and brothers, Tim and Rick Samuels.
Visitation will be from 1-3 p.m. on Saturday, January 27, 2018 at the Johnson-Danielson Funeral Home, 1100 N. Michigan Street, Plymouth.