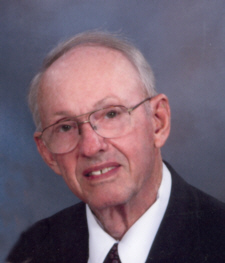 Harold Stephen Van Vactor, 81, moved on with our Lord, Jesus Christ. He passed away at his home following an extended illness in the morning hours of Wednesday, September 9, 2009.
Harold was born on November 30, 1927 in Plymouth, IN to Russell and Eva Lena (McCloud) Van Vactor, and was a lifelong Plymouth resident.
He is survived by his wife, Marjorie Hutchings Van Vactor, sisters Martha Mann and Ruth (Dean) Kinney, sons David R. (Chris) Van Vactor and Stephen J. (Maria) Van Vactor, daughters Barbara V. (David) Miller and Patricia L. (Edward) Wright.
Harold is also survived by 16 grandchildren, 40 nieces and nephews, and 10 great grandchildren.
He was preceded in death by his parents, and a daughter Judy, and son Gary.
An excellent athlete at Plymouth High School, he turned down a track scholarship to Purdue in order to carry on the family farming operations.
Harold began his farming career along side his father, and grew hay, wheat, corn and raised livestock.
On June 12, 1949, Harold married Marjorie Lillian Hutchings (Mudge) in the Plymouth Methodist Church, where they continued to be lifelong active members. On June 12, 2009, Harold and Mudge celebrated their 60th wedding anniversary with an open house at their home.
In the mid 1950’s Harold and Mudge expanded their farming operation to include the cultivation of vegetables. They grew cucumbers for Heinz and expanded the operations by growing tomatoes and other vegetables for Campbell’s Soup and Del Monte. They were one of the first operations in the county to employ migrant workers. By the 1970’s Harold and his family were farming approximately 2200 acres. In addition to the homestead, they farmed leased property where the Airport, Hospital, Pine Creek Plaza, and many of the city’s housing developments now stand. In addition to selling vegetables to major corporations, the family was well known in the area for selling produce to local grocery stores, at the South Bend farmers market, and their roadside vegetable stand.
Whenever Harold and the family traveled around the country, his “vacation pictures” would always include other farmers’ fields, irrigations systems, and farming equipment.
In addition to farming, Harold also worked at Ball Band in the early years of his marriage, and like his father, drove a school bus for many years. In 1976 he and Mudge also established H & M Van Vactor Trucking, and operated that business in addition to farming, until selling that business to Stephen and Patricia in the mid 90’s.
In the mid 90’s Harold turned over the ownership of Van Vactor Farms, Inc. to his four children, and his direction and guidance was instrumental in the continuation of farming operations and the real estate development through Vanco Development, LLC.
In 2007, Harold and the family were informed that they met the requirements for the Hoosier Homestead Award, an honor bestowed by the State of Indiana Department of Agriculture for family farms owned by the same family for over 100 years.
Always community minded, Harold served on the board of the USDA Agricultural Stabilization and Conservation Services agency, was a board member of the Marshall County Co-op, served on the Marshall County Plan Commission and the Board of Zoning Appeals. His longtime membership in the Lion’s Club was among his favorite activities, traveling to Mexico on several occasions to distribute eyeglasses to those in need.
Longtime supporters of Plymouth athletics, he and Mudge attended nearly all home basketball games. He will be missed by all for his gentle demeanor, dedication to family, a warm smile, conservative values, and his giving nature.
Friends may call from 4 – 8 p.m. Friday, September 11th in the Johnson-Danielson Funeral Home, 1100 N. Michigan St., Plymouth. Funeral services will be at 11 a.m. Saturday, September 12th in the First United Methodist Church, 400 N. Michigan St, Plymouth with visitation one hour prior to the service. Rev. Dr. Dean Fager, pastor will officiate.
Burial will follow in the New Oakhill Cemetery, Plymouth.
Memorial gifts may be made to the First United Methodist Church or the Plymouth Fireman’s Memorial Scholarship Fund c/o the Marshall County Community Foundation, 2701 N. Michigan St., Plymouth, Indiana 46563.