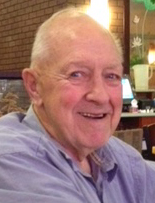 Former Plymouth resident, Harold W. Baker, was called home to be with his Lord from his sonâ€™s home in Portage, Michigan, on Monday, July 30, 2018.
Harold was born in Plymouth, Indiana on September 29, 1934 to Delbert R. and Clara T. (Huge) Baker. He graduated from LaPaz High School with the class of 1952. After high school, Harold joined the United States National Guard from 1953-1961.
Harold married Josephine E. Lamprecht on October 10, 1954 in the Shiloh Church. The couple made Plymouth their home and raised four children.
He worked as a foreman for American Containers since 1970 until his retirement in 1997.
Harold was a member of the Shiloh Church and was active in the Cub Scouts Program for many years. Most recently, he was an active member at Lighthouse Community Wesleyan Church in Portage, Michigan.
He is survived by four children: David L. (Jeri) Baker of Portage, MI, John W. (Michelle) Baker of Brunswick, OH, Mark A. (Becky) Baker of Jasper, IN and Ruth (John) Prater of Centerville. MO; 6 grandchildren; and siblings: Dorothy (Gilbert) Berrier of Bremen, Jeannette (Robert) Vermillion of Lakeville and Keith (Ines) Baker of Buchanan, MI.
Harold was preceded in death by his wife, Josephine in 2011, and parents.
Visitation will be held from 4-7 p.m. on Friday, August 3, 2018 in the Johnson-Danielson Funeral Home, 1100 N. Michigan Street, Plymouth.
Funeral services will be at 11 a.m. on Saturday, August 4, 2018 in the Shiloh Wesleyan Church, 10532 4B Road, Plymouth where visitation will continue one hour prior to services. The Pastor Richard VanVuren will officiate.
Entombment will be in the New Oak Hill Mausoleum, Plymouth.
Memorial contributions can be made to the Shiloh Wesleyan Church, 10532 4B Road, Plymouth, IN 46563.