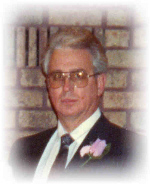 Sixty-two-year-old Harry N. Miller died at 12:45 p.m. on Sunday, February 2, 2003, at his residence, 12510 Hillside Drive, Plymouth. Harry had been a resident of Plymouth since May of 1974, coming from South Dakota. He was born on September 9, 1940, in Tucson, Ariz., the son of Jacob C. and Elizabeth C. Fishback Miller. Harry graduated from Mobridge High School, Mobridge, South Dakota in 1958. He then furthered his education at the School of Mines in Rapid City, South Dakota. On October 26, 1960, in Selfridge, N.D., Harry and Elizabeth “Betty” M. Kraft were married. Harry started working for Coast to Coast hardware in 1960, in Mobridge, South Dakota. After working for Coast to Coast for a year and a half, he then went to work for the J. C. Penney Co., where he managed three stores over a period of thirteen years. He then moved to Plymouth, where he started the popular and highly successful Coast to Coast Hardware Store in Plymouth in 1974 and converted it to Ace Hardware in 1998. In 2001, he sold the business to Don Smith. Harry was an avid hunter and fisherman. A conservationist, he sponsored Duck’s Unlimited and Quail Unlimited. He loved to barbecue for his family and friends, especially in large groups. A stock car racing fan, Harry had raced his own car when he was younger. Another of Harry’s hobbies was gopher roping in South Dakota. When he was younger, he enjoyed helping his grandparents with their vegetable garden. He was a member of St. Michael’s Roman Catholic Church and the Plymouth Moose Lodge. Harry is survived by Betty, his wife and helpmate of 42 years and by their two sons and their families. His sons are Steven A. Miller, LaPorte, Ind., and Gregory W. (Hope C.) Miller, Plymouth. Three granddaughters and a grandson also survive: Marcia N. and Cala E. Miller, both of North Liberty, Ind., Elizabeth C. Miller, Plymouth, and Nathan C. Miller, of Pensacola, Fla. A brother Paul (Dianne) Miller of Selby, S.D., and a sister, Judy (Jim) Horst, Carrollton, Texas, survive as well. Harry was preceded in death by his parents and grandparents. Visitation with his family will be on Wednesday, February 5, 2003, from 4 to 8 p.m. at the Johnson-Danielson Funeral Home, 1100 N. Michigan St., Plymouth, where a Rosary will be said at 8 p.m.. A Mass of Christian Burial will be prayed for Harry at 10:00 a.m. on Thursday, February 6, 2003, at St. Michael’s Roman Catholic Church, 625, N. Center St., Plymouth. Father Emmanuel Chikezie will officiate. Entombment will be in New Oakhill Cemetery, Plymouth. Gifts in memory of Harry may be made to St. Michael’s Catholic Church or to the Marshall County Hospice.