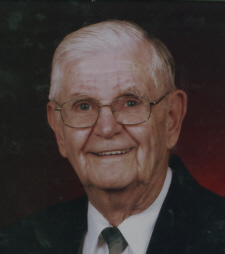 Harvey Junior “Mike” Hatfield, 91, of 805 Baker Street, Plymouth, died at 3:47 p.m. on Monday, September 29, 2008, in Miller’s Merry Manor, Plymouth.
“Mike” Hatfield was born in Bourbon, Indiana, on February 23, 1917, the son of Harvey Johnson and Barbara Ellen Wolf Hatfield. He was a 1935 graduate of Plymouth High School.
On June 8, 1940, in Plymouth, he and Julia Ann Wright were married.
An electrician for United Telephone for years, he then became self-employed master electrician, retiring in 1994.
He was a member of IBEW, the First Presbyterian Church of Plymouth and the Lakeville Lions Club.
Mike was a man of faith who’s family came first. He loved people and helping everyone. He will be dearly missed.
Mike is survived by his wife, Julia Ann, and by a son, Michael Allen and daughter-in-law, Susan Gay Hatfield, Whitefish Bay, Wisconsin.
Two grandchildren, Michael (Karen) Hatfield, Jr., Appleton, Wisconsin, and Laura (Kenneth) Whitelaw, Johnston, Iowa, and four great-grandchildren: Michael Hatfield IV: Montgomery “Monty” Hatfield, both of Appleton, Wisconsin: Bryony Whitelaw and Ellery Whitelaw, both of Johnston, Iowa, also survive.
Mike was preceded in death by his parents and three brothers: Virgil, Russell and Carl.
Friends will be welcomed to celebrate the life of Mike Hatfield on Saturday, October 4, 2008, from 2 to 3 p.m. in the First Presbyterian Church, 401 N. Walnut St., Plymouth.
Memorial services will follow visitation at 3 p.m. in the church. The Rev. Paul Nye will officiate.
The Johnson-Danielson Funeral Home has been entrusted with arrangements.
Burial will be in the Chapel Hill Cemetery, South Bend, Indiana.
A special ”Thank-you” to the staff of Miller’s Merry Manor for the extraordinary care given to Harvey.
Memorial gifts in Mike’s name may be made to the Lakeville Lions Club, the American Cancer Society or the First Presbyterian Church of Plymouth.