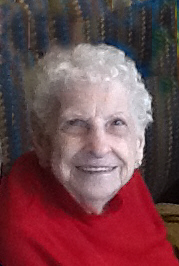 Hazel B. Gilliland, 90, and Plymouth resident since 1960, passed away at 5:10 a.m. on Wednesday, September 21, 2016 at Millerâ€™s Merry Manor in Plymouth.
Hazel was born in Indianapolis, Indiana on May 1, 1926 to Phreno and Carrie (Shook) Mathis. She graduated from Bunker Hill High School with the class of 1944.
After graduating from Bunker Hill High School, Hazel worked for Indiana Bell Telephone until 1960 before moving to Plymouth. She was employed at Ancilla Domini from 1981-1991 until her retirement.
She was a member of the First Baptist Church of Bunker Hill.
Hazel is survived by her children: Dennis L. Gilliland of Seymour, IN, Sandy K. Lingefelter of Bristol, IN, Roger D. (Lila) Gilliland of Kokomo, IN and Rex A. (Kathleen) Gilliland of Plymouth. Also surviving are 15 grandchildren, 19 great-grandchildren, her brother, Robert Mathis and sister, Mary Ann Crites.
She was preceded in death by her daughter, Lori A. Snyder, husband Kenneth Gilliland, parents and siblings: Wilbur, Louise, Bertie and Freeman.
Visitation will be held on Saturday, September 24, 2016 from 11-1 PM in the Johnson-Danielson Funeral Home, 1100 N. Michigan Street, IN 46563. Funeral services will follow at 1 PM in the funeral home.
Burial will follow in the Oak Hill Cemetery.