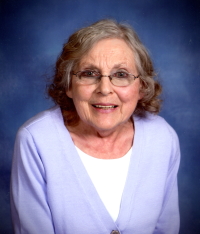 Hazel Marie Scott passed away in the early morning hours of December 27, 2019, surrounded by the love of her family. She was born on August 7, 1938 in Plymouth, Indiana, to Victor Willard and Rosemary Quinn Hawkins. Hazel was a baker, especially good at baking Christmas cookies. A lover of animals she enjoyed feeding wildlife, and tending to her cats. She was an avid reader and enjoyed quiet time stitching and knitting. A devout Christian she was a member of Koontz Lake Missionary Church, and enjoyed her bible study. She is survived by her three children, two daughters Tina Marie Burch of Walkerton, IN and Susan (Tim) Scott-Marsh of Buchanan, MI and son, John E. (Beth) Scott of Indianapolis, IN; eight grandchildren, Blake (Marji) Burch of Walkerton, Devin (Tiffany) Burch of Grovertown, and Quintin (Carrie) Burch of Teagarden, Katlyn and Kristen Gustafson of Walkerton, IN, Lee Ann (Brian) Kissinger of Walkerton, and Margaret and Abigail Scott of Indianapolis; two sisters Vicki M. (Gary) Maybee of Plymouth and Roseanna (Fred) Jean of Napoleon OH; two brothers Jon (Dottie) Hawkins of Plymouth, and Father Kevin Bauman of South Bend; sister-in-law Judy Marks; eight grandchildren and six great-grandchildren.
Hazel was preceded in death by her parents and infant daughter Mary Kathleen Scott, son and daughter-in-law Phillip L. (Sheila) Scott and brother Stan Marks. Visitation will be from 3:00 PM until 5:00 PM Sunday, December 29, 2019 at the Johnson-Danielson Funeral Home, 1100 North Michigan Street, Plymouth. Funeral services will be on Monday December 30, 2019 at 11:00 AM the funeral home, with Pastor Brian Baughman officiating. Burial will follow in the Grovertown Cemetery.