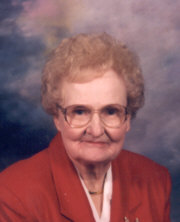 Helen A. Watters, 81, a resident of the Plymouth area since 1947, died on Thursday, June 24, 2004, at 10:23 a.m., in the Pilgrim Manor Nursing Home, 222 Parkview St., Plymouth.
Helen was born on December 29, 1922, in Buchanan, Mich. She was the daughter of William and Hazel I. Blanchard Hibnar. She graduated in 1940, from Niles High School, Niles, Mich.
On December 24, 1949, Helen and James E. Watters were married in Plymouth, Ind. James died on March 24, 1973.
Helen had worked as a sales clerk at the City News Agency, Plymouth, for 14 years, until 1984. After that, she did home health care for several years, then she worked for the American Red Cross office in Plymouth for five years.
She attended the Plymouth Wesleyan Church.
Helen is survived by a daughter and son-in-law, Karen and Marlin Betz, Plymouth.
A grandson, Jason Murray, with the National Guard in Bosnia and three granddaughters, Amanda Murray and her daughter, Emily Grace, Plymouth; Lindsay and James Mann and their son Jaxon of Greenwood, Ind. and Rachel Wiseman and her children, Riley, Bailey and Delaney, all of Warsaw, Ind., also survive.
Three sisters: Lorna and Laverne Hazard, Cassopolis, Mich.; Arlene Bowden, Clovis, New Mex.; Doris and Nelson Yockey and a brother-in-law, Richard Cruse, all of Plymouth, also survive..
Helen was preceded in death by her parents, her husband and an infant daughter, Marsha Watters, and a sister Wilda Cruse. A brother-in-law, Hugh Bowden has also died.
Friends will be welcomed by the family to share memories and celebrate Helen’s life, on Tuesday, June 29, 2004, from Noon to 2 p.m. in the Johnson-Danielson Funeral Home, 1100 N. Michigan St., Plymouth.
Funeral services for Helen will be held at 2:00 p.m. on Tuesday, June 29, 2004, in the funeral home. The Rev. Robert Klatt, senior’s pastor of the Plymouth Wesleyan Church, will officiate.
Burial will be in New Oakhill Cemetery, Plymouth.
Memorial gifts in Helen’s memory may be made to the Plymouth Wesleyan Church.