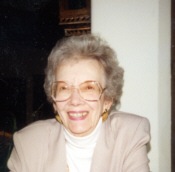 Helen Loretta Bartlett, 87, living at Pretty Lake prior to moving to Miller’s Merry Manor’s Assisted Living facility, died in Saint Joseph Regional Medical Center, Plymouth, at 8 a.m. on Thursday, October 30, 2003.
Helen, born on July 5, 1916, in Milwaukee, Wis., was the daughter of Leroy S. and Helen Weber Bartlett. At the time of their daughter’s birth, LeRoy and Helen already had two sons: LeRoy (Roy) born in 1908, and Albert (Al) born in 1910. The Bartlett family grew tired of living in the city and moved to Downer’s Grove, a suburb of Chicago, where Helen’s younger brother Robert (Bob) was born in 1925.
Helen attended Lincoln Elementary School and graduated from Downer’s Grove High School in 1933.
She had exceptional business skills and quickly landed a job with an insurance company in Chicago. After working there for five years, she was hired by the Pepsodent Company to open and answer Bob Hope’s fan mail. Pepsodent recognized her efficiency and ability and promoted her to work as the executive assistant to their advertising manager. In 1945, Pepsodent decided to move their offices to New York. Helen did not want to leave Chicago. She was fortunate however, because Fairfax Cone, the head of the Foote, Cone & Belding advertising agency, had gotten to know her through his visits to Pepsodent and asked her to come to work as his assistant. She worked for Mr. Cone until his retirement in 1970 and then for his successor, Arthur Schultz.
Foote, Cone & Belding was a large company and Fairfax Cone dealt with many important people. Through her work at FCB, Helen was able to work for, and with, Albert Lasker, Katherine Graham and Helen Gurley Brown. When FCB traveled to Monaco for a conference, she met Princess Grace.
Helen’s brother Bob and his family decided to move to California in 1975 and Helen moved with them. She was able to transfer to the FCB/San Francisco office and worked for the managers of that office until her retirement in 1986.
In 1990 when Bob and his wife Joan retired, they and Helen moved to Plymouth, Indiana, where they had jointly bought a home on Pretty Lake. Helen had always been an avid golfer and she joined the Plymouth Country Club.
In addition to playing golf, Helen enjoyed playing cards, listening to music and watching sports. She loved watching the Chicago Cubs and professional golf matches and was a huge fan of Arnold Palmer. Throughout her life, she was able to indulge her love of travel by visiting places around the world, including Italy, France, Monaco, England, Belgium, Venezuela, Guatemala, Mexico and Hawaii.
She is survived by her sisters-in-law, Joan Bartlett and Ella Bartlett; four nieces: Shirley Tibbitts, Diane Commes, Patricia Emslie and Judy Bartlett. Two nephews, Robert and Scott Bartlett and 14 great-nieces and nephews also survive.
Helen was preceded in death by her parents and three brothers, LeRoy, Robert and Albert.
Memorial services will be held at 11 a.m. on Saturday, November 15, 2003, at the First United Methodist Church. The Rev. Dr. Dean Fager will officiate.
Memorials may be made in Helen’s memory to the Marshall County Humane Society.