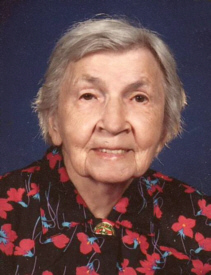 Helen E. Masterson, 93, formerly of Sycamore Road, passed away at 9:30 a.m. on Sunday, July 7, 2013 in Pilgrim Manor, Plymouth.
Helen was born on September 19, 1919 in Plymouth to Charles Royal and Rosa Pearl Chapel Harris. They passed away in 1925. Helen and her two siblings were raised in Bourbon by her grandmother, Mary Elizabeth Chapel.
In 1939, Helen married Arthur Masterson in Plymouth. She was a “farmeret”, taking care of the animals while her husband worked mostly in foundries as a molder. He passed away in 1983. After his death, Helen began working at the Boy’s & Girl’s Club in Plymouth.
She stayed single until she met Chester A. Wilcox and they got married on February 17, 2001. He preceded her in death on February 21, 2008.
Helen was a member of Plymouth Wesleyan Church since 1986 and was a member of the Missionary Society. She also enjoyed reading and quilting.
She is survived by her sister, Maxine Pearl Hill of Kentucky; niece, Maryann Ramos of Munster, IN and her son, Robert (Judy) Ramos and their children, Danielle and Scott; several Masterson nieces and nephews and great-nieces and nephews; and her close friends, David (Caroline) Denzler of Maryland.
She was preceded in death by her parents, son, Arthur, and brother, Charles.
Visitation will be from 5 – 8 p.m. on Wednesday July 10, 2013 in the Johnson-Danielson Funeral Home, 1100 N Michigan Street, Plymouth.
Funeral services will be at 11:00 a.m. in the funeral home on Thursday July 11, 2013 with Pastor John Branch officiating.
Burial will be in New Oakhill Cemetery.