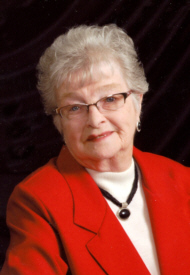 Helen J. Greer, 92, of 805 Baker Street, passed away at 4:37 p.m. on Sunday November 30, 2014 at Miller’s Merry Manor, Culver.
She was born on February 22, 1922 in Kosciusko County to the late Roy and Nellie (Igo) Walters. On November 15, 1947 she married Willard “Pete” Greer who preceded her in death on August 12, 1986.
Helen graduated from Mentone High School in 1941. She worked at Ball Band in Mishawaka from 1942 to 1954, and then for Easy Heat Wirecraft in Lakeville for 18 years before her retirement in 1980.
She was a member of Pine Creek Church of the Brethren. She enjoyed music and was a member of the former Michiana Organ Club and the former Kokomo Music Club. She loved playing cards, fishing, crocheting, crafts and traveling. She also enjoyed spending time with her special friends at LifePlex.
Helen is survived by her daughter, Sandra K. (John Thomas) Wallace of Plymouth. One brother, Kenneth (Erma) Walters of Akron. John’s children: Shawna (Brady) Neilson and their son Nicholas of South Bend and John (Priscilla Carlsen) Thomas of Northport, AL. Many nieces and nephews also survive.
She was preceded in death by her parents, husband Pete, and sister Letha Hamman.
Visitation will be from 10-12 p.m. on Thursday, December 4, 2014 in the Johnson-Danielson Funeral Home, 1100 N. Michigan Street, Plymouth. Funeral services will immediately follow in the funeral home with Pastor Steve Van Houten officiating.
Burial will be in the New Oakhill Cemetery, Plymouth.
Memorial contributions can be made to the Pine Creek Church of the Brethren, 25075 Stanton Road, North Liberty, IN 46554 or to the Center for Hospice Care 112 S. Center St. Plymouth IN 46563.
Notes of condolence may be sent to the family through the web-site: www.johnson-danielson.com