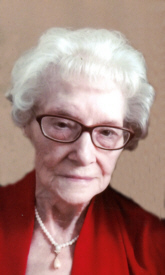 Helen Risner Kitts Reynolds, 87, of Plymouth, passed away Tuesday, March 21, 2017 in the Center for Hospice Care, Elkhart. Helen was born December 9, 1929 in Prestonsburg, Kentucky to Hargos and Carrie (Whitaker) Adams. She married William Risner in 1949 and they were married for twenty-nine years. They had six children. He preceded her in death in 1978. In 1981 she married Carson Kitts; he preceded her in death in 1997. Then in 1998 she married Bill Reynolds; and he survives. Helen loved to walk, garden, travel and to crochet. The most important thing in her life was being with her children, her husband and her grandchildren. She was a wonderful mother-doing without if she thought her children needed something. She loved reading the bible and was a member of the First United Methodist Church.
Helen is survived by her husband, who cared for her to the end; Bill Reynolds of Plymouth, her five children; James (Barb) Risner of Warsaw, Joe (Billie) Risner of Akron, Drema (Todd) Montgomery of Burket, Debbie (Mike) Jensen of Hamlet, Danny (Donna) Risner of Warsaw, daughter-in-law; Irene Risner of Silver Lake, two step-children; Mary (Dan) Sloan of Florida, William (Alanna) Reynolds of Springfield, Illinois, fifteen grandchildren, and sixteen great-grandchildren. Also surviving are her siblings; Opal (Henry) Arnett, Mary (Bill) Wadkins of Silver Lake, and Merl Adams of Burket.
She was preceded in death by her parents, two husbands, son; Paul Dean Risner, brothers; Joe, Cecil, Henry, Aaron and Ellis Adams, one sister; Oma Jean, one grandchild; Tonya Lynn Risner and one great-grandchild; Christian Michael Berger. Visitation will take place on Monday, March 27, 2017 from 5:00-6:30 PM in the Johnson- Danielson Funeral Home, 1100 North Michigan Street, Plymouth, Indiana 46563. A service will follow at 6:30 PM, officiated by Pastor Glenn Hall.
Burial will be at a later date in the New Oak Hill Cemetery. Memorial contributions can be given to the Parkinsonâ€™s Disease Foundation, 1359 Broadway, Suite 1509, New York, NY 10018 or the Center for Hospice, 112 South Center Street, Suite #C, Plymouth, Indiana 46563.