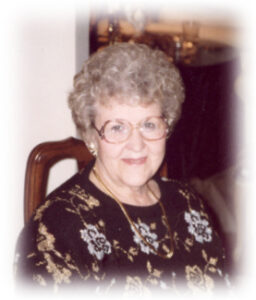 Helen L. Richey, 91, a Plymouth resident since 1999, formerly of Walkerton, passed away at 12:15 a.m. on Monday, June 4, 2012, in Miller’s Merry Manor. The daughter of Harry Lloyd and Ida Louise Rinker, Helen was born on February 14, 1921 at LaCrosse, Indiana. A 1939 graduate of Union Township High School, LaPorte County, she was president of her class.
On April 5, 1941, in South Bend, Helen and Paul R. Richey were married. Paul preceded her in death on November 12, 1999.
Helen had worked as the bookkeeper at Walkerton Skel-Gas for over 20 years. For many years she was a member of the First Baptist Church, Walkerton. Helen enjoyed spending her time watching the birds and growing flowers. While at Miller’s she looked forward to her favorite magazine – “Birds & Blooms”.
Helen is survived by her son, Gary P. Richey of Plymouth; her daughter, Carole Wolford Caird of Dunnellon FL; a step-son, Charles “Fred” and his spouse P.J. Richey of New Buffalo, MI; a step-daughter, Paula M. Wade of Westville and; two sisters: Alice G. Taylor of Plymouth and Velma R. & Ken Grise of South Bend and Roy Michael Roush, her guardian and friend of Plymouth and several nieces and nephews. She was preceded in death by her parents, her husband, Paul, a sister, Dorothy Satkoski and two brothers: Raymond Rinker and Lee Rinker.
Friends may visit with the family on Thursday, June 7th from 11:00 a.m. to 1:00 p.m. in the Johnson-Danielson Funeral Home, 1100 N. Michigan Street, Plymouth. Funeral services officiated by Fr. William Kummer, will be held immediately following visitation at 1:00 p.m. in the funeral home.
Burial will be in Oakhill Cemetery, Plymouth.
In Lieu of flowers, memorial contributions may be made to the Marshall County Humane Society, P.O. Box 22, Plymouth, IN 46563.