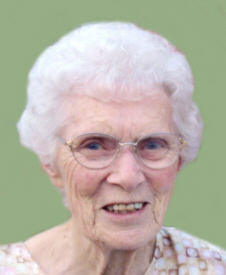 Helen Louise (Hackett) Spier, 89, a Plymouth resident most of her life, passed away at 6:14 p.m. on Tuesday, October 14, 2014 in the We Belong Senior Home in Plymouth.
The daughter of Victor and Elizabeth (Gross) Hackett, Helen was born on August 2, 1925 in Akron, Ohio. She was a 1943 graduate of Newburg High School in Newburg, WV.
On September 7, 1952, Helen and Henry H. “JR” Spier were married in Plymouth. Henry preceded her in death on March 29, 1988.
A Registered Nurse, Helen had received her training at Union Protestant Hospital, Clarksburg, WV during WW II under the Cadet Nurse Program. She had worked as an O.B. Nurse and Director of Nurses at Parkview Hospital, now St. Joseph Regional Medical Center, for 13 years. She then worked as a School Nurse for the Plymouth School System for 23 years from 1965 to 1988. Helen was a member of Immanuel Lutheran Church, Donaldson where she also was a member of the Quiet Quiltters. She was a member of the Plymouth Tri kappa, enjoyed gardening, meeting with the Fuddie Duddies and the Lunch Bunch. Some of her most enjoyable times were spent with her family.
Helen is survived by two sons: Christopher (Patricia) Spier and their children: Jeff (Jennifer) Spier and their children, Liyah, Caidence and Jaiden; Kyle Thomas; Nick Spier; Holly Spier; and Jeffery A. (Linda) Spier and their children: Racheal Spier and Justin Spier and a brother, William (Lorretta) Hackett of Sterling, VA.
She was preceded in death by her parents and her husband, Henry “JR”.
Family and friends will gather to celebrate Helen’s life on Sunday, October 19th from 3 to 6 p.m. in the Johnson-Danielson Funeral Home, 1100 N. Michigan St., Plymouth, and at the Church on Monday, one hour prior to the service. Funeral services, officiated by Pastor Dennis Wenzel, will be held at 11:00 a.m. on Monday, October 20th, in the Immanuel Lutheran Church, 6835 Union Road.
Burial will be in Immanuel Lutheran Cemetery, Donaldson.
Memorial gifts may be made to the Center for Hospice Care, 112 S. Center St., Plymouth, IN 46563 or Immanuel Lutheran Church, 6835 Union Road, Plymouth, IN 46563 or the We Belong Senior Home, 300 Meadow Lane, Plymouth, IN 46563