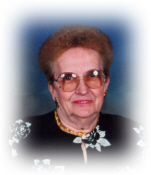 Helen Marie Murphy, 75, formerly of Plymouth, died Nov. 29 at Southfield Village, in South Bend, following an extended illness.
She was born on April 20, 1929, to John Edward and Bertha Ellen (Hasley) Davis in the township of Newport, Ohio where she lived most of her youth. As a teenager, she moved to Culver, Ind., to live with her brother and sister-in-law, the Rev. George and Crystal Davis.
She graduated from Culver High School in 1947. On Nov. 4, 1950, she married Leo W. Murphy, of Plymouth, who preceded her in death in 1989.
Helen was a homemaker, mother and miracle worker who dedicated her life to supporting her family and their lives.
She is survived by a daughter, Karen Murphy Schefmeyer (Donald), of South Bend; a son, Leo W. Murphy, Jr. (Christine) of Chicago; a grandson, Thomas, of Chicago; two sisters, Mable Minor and Sylvia Ohmer, both of Newport, Ohio, and several nieces and nephews.
Besides her husband, she was preceded in death by her parents; two brothers, George and Clifford; and two sisters, Bessie Bell and Ethel Mae Pritchett.
In the early 50s, Helen and her husband lived in Germany while he was in the Army. Later, they settled north of Plymouth and started a small Christmas tree farm located on Old Michgan Road, just north of the outdoor theater. She was an avid gardener and became an expert in hostas, day lilies and daffodils. Each spring her yard was filled with thousands and thousands of daffodils.
She was a master gardener and a life-time member of Fernwood Nature Center. She also enjoyed fishing, camping and traveling throughout the US and Europe.
On Friday, visitation will be 10-11 a.m. and services at 11 a.m. at the Johnson-Danielson Funeral Home, 1100 N. Michigan, Plymouth. Family and friends are invited to a noon luncheon at Christo’s Banquet Center, 830 Lincolnway East, Plymouth. Burial will be at 2 p.m. at Oak Hill Cemetery, Plymouth.
In lieu of flowers, memorial contributions may be made in her name to Fernwood, 13988 Range Line Rd., Niles, MI 49120.