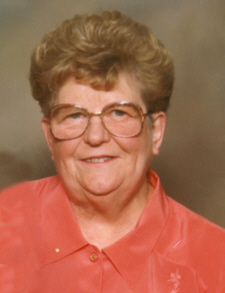 Helen “Marie” Johanning, 81, passed away Monday, January 22, 2007 at 4:25 p.m. in Miller’s Merry Manor. Marie was born January 15, 1926 in Benwood, West Virginia to Lyle S. and Mary Ellen (O’Connell) Morgan. Marie graduated from Central Catholic High School, Wheeling, West Virginia with the class of 1944.
She and her sister Geraldine Wendel, of Plymouth, were the two girls in a family with seven brothers. Four of Marie’s siblings survive her, including her sister, “Gerry”, and three brothers; Bob (Rita) Morgan, Paul Morgan, and Leo (Linda) Morgan who reside in Wheeling, West Virginia along with several nieces and nephews.
On October 4, 1947 in Wheeling, Marie became the bride of James F. Johanning and shared 48 wonderful years together. Jim preceded in death on September 15, 1995. Surviving are their four daughters and families; Mary Kay Davis and husband, Jack of Plymouth and children: J. Eric, Matthew, Krysta, Nate, Elizabeth and Kyle; Carol Buchanan and husband, Tom, of Plymouth and children: Megan and Shannon; Judy Vinall and husband, Jim, of Plymouth and son Adrian James; and Cindy Shivers and husband, Bruce, of Mason, Ohio and children: Morgan, Andy and MacKenzie. Sixteen great-grandchildren complete their loving family including Michael Noel Magee who also preceded in death.
Marie and Jim Johanning moved their family from West Virginia to Plymouth in 1963, and began finding new friends, starting new traditions, while celebrating all the old as well. At the heart of Marie’s life was her family, and while she worked many interesting jobs in her lifetime including a favorite at The Divine Heart Seminary, her role as wife, mother, grandmother and friend is what defined her. Beginning their adventure in Plymouth, Marie and Jim met many friends through their daughters’ friends and through membership in St. Michael Roman Catholic church, where she became involved in the Altar Rosary Society. They loved a good time with family and friends, starting traditions like “Gourmet Club” with five other couples, where once a month one couple hosted dinner or the annual Morgan reunion in Wheeling, WV that still continues today- 36 years later! She did her best to give her family the best, whether it was watching a sick child home from school for a day or watching a toddler everyday so her daughter could finish her nursing degree. Marie passed this strong connection to family all the way to her great-grandchildren, who still celebrate her traditions with their extended cousins and great aunts and uncles. It is for these things Marie will be remembered most, and no Irish game will pass without a glass raised, and cheers to the woman who taught us the legacy of NOTRE DAME FOOTBALL!
Friends are invited to join the family in remembering the life of Marie on Sunday, January 28, 2007 from 2 – 5 p.m. in the Johnson-Danielson Funeral Home, 1100 N. Michigan St. Plymouth, where a Rosary will be said at 4:30 p.m. Sunday.
A Mass of Christian Burial will be held at 11 a.m. Monday, January 29th in St. Michael Catholic Church, 613 N. Center St. Plymouth. The Rev. William Kummer, pastor will officiate. Burial will follow in the New Oakhill Cemetery, Plymouth
In lieu of flowers, Marie’s family would like donations to either St. Michael’s Church or the Center for Hospice and Palliative Care, 112 S. Center St., Plymouth, IN 46563. The family extends a sincere thank you to these community groups for their supportive role in Marie’s life.