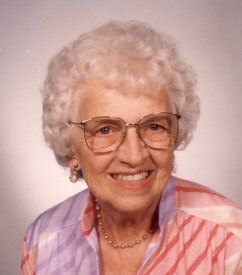 Helen V. Parker, 89, died at 11:30 a.m. on Tuesday, January 31, 2006, in Miller’s Merry Manor, Plymouth. She has been a Plymouth resident since 1950, coming from Downers Grove, Illinois and establishing their home on the Plymouth-Goshen Trail until 1993. Together they moved to River Park for the next seven years and then Miller’s Merry Manor, Plymouth.
Born in South Bend, Ind. on September 12, 1916, Helen was the daughter of Harry S. and B. Erma Cole Rowe. She graduated from LaPaz High School with the class of 1935.
On December 22, 1935, Helen and Gordon E, “Bud” Parker were married in Lakeville.
A homemaker, Helen enjoyed raising her children after which she continued to share that interest while serving as Youth Director for the Plymouth Church of the Brethren for over 15 years along with her involvement in the church camp ministry. She participated with the youth in The Martin Luther King March. She enjoyed raising vegetables and flowers, canning and sharing with others, singing and playing the piano and walking everyday. Her walks always involved a visit or kind word to those she met along the way – her sweet Godly demeanor remained with her until her passing.
Helen is survived by Bud, her husband of 70 years, a daughter, Sandra and Robert Thomas of Columbia city, IN, and son, Larry G. and Virgie Parker of Tallahassee, FL, seven grandchildren and ten great grandchildren.
Also surviving are three sisters: Berry J. Stump Holderead of Plymouth; Mary E and David Read of Milwaukee, WI: and Wanda J. Colavetti of Los Angeles, CA, and two brothers, Owen E. and Betty Rowe and Paul H. and Shirley Rowe, both of Plymouth.
Helen was preceded in death by her parents, a sister, Virginia E. Hepler, and two brothers, Harold Rowe and Harry S, Rowe, Jr.
Friends will be welcomed on Friday, February 3, 2006, from 4 to 7 p.m. in the Johnson-Danielson Funeral Home, 1100 N. Michigan St., Plymouth, and at the church one hour prior to the services.
A celebration of her life will be at 12 noon on Saturday, February 4, 2006, in the Plymouth Church of the Brethren, 1130 N. Michigan St., where she was a member. Pastors David Kerkove and grandson Joel Thomas will officiate.
Burial will follow in the Bremen Cemetery, Bremen, IN.
Memorial gifts in Helen’s memory may be made to the Plymouth Church of the Brethren–Youth Department.