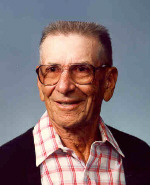 Henry A. “Hank” Kepler, 89, a former longtime Argos resident, living at 423 Cricket Lane, Michigan City, Ind., for the past 2 1/2 years, has died of an apparent heart condition. Hank died at 10:42 a.m. on Sunday, March 9, 2003, in the St. Joseph Regional Medical Center, Plymouth. Born in Burkett , Ind. , on June 23, 1913 , he was the son of Harry and Gustie Foltz Kepler. He graduated from Argos High School with the class of 1932. On August 24, 1936, in Plymouth, Hank and Edith D. Gordon were joined together in holy matrimony. Edith died on July 12, 2000, after 64 years of marriage. Hank retired from the McCord Corporation in Plymouth with over 20 years of service. Once a resident of Culver he served on the Town Board. He also served the Argos community on the Town Board and through the years by working on numerous committees and projects. He had many interests. A true outdoorsman, he coon hunted from and early age and loved to fish year around: he frequented local lakes and Southern Indiana reservoirs. He played baseball in the 1940s on the Men’s Independent League and was an adult leader in the Argos Explorer Scout program. One particular trip to the Boundary Waters, was a featured story in “Boy’s Life” magazine. He also became quite a fan of Professional Wrestling. Hank was a member of the Argos United Methodist Church for over 50 years. While living in Michigan City , he attended the Countryside Christian Church where he made numerous friends. He is survived by two sons, a daughter and their families. They are Robert K. ‘Butch’ and Carole Kepler, Plymouth ; Albert E. and Betty Kepler , Michigan City and Sondra L. and Tom Christiansen, Plymouth . Eight grandchildren also survive. They are: Cindy J. Danielson, Kristi K. Ruiz, Kelli K. Kalvaitis, Sheli R. Novak, Brett G. Kepler Matt W. Christiansen, Brenda L. Birchmeier and Vicki S. Staples. Nineteen great-grandchildren and two great-great-grandchildren survive as well as a sister, Pearl Rice, Lake Station , Ind. , and a brother, Emmanuel ‘Slim’ Kepler, Plymouth . Hank was preceded in death by his parents, his wife and seven brothers and sisters. Friends are invited to celebrate his life with his family on Wednesday, March 12, 2003 , from 4 to 8 p.m. in the Johnson-Danielson Funeral Home, 1100 N. Michigan St. , Plymouth . Funeral services will be held in the funeral home at 11 a.m. on Thursday, March 13, 2003. The Rev. Robin Smith, pastor of the Argos United Methodist Church, will officiate. Burial will be in the New Oakhill Cemetery , Plymouth . Gifts in memory of Hank may be made to the Argos United Methodist Church or to Compassion Ministry c/o Countryside Christian Church, 7056 W. 450 North, Michigan City, IN