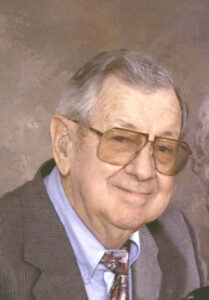 Herman C. Faulkner, 93, a resident of Argos for 43 years and formerly from Ohio, passed away at his home while under Hospice care. He had been in failing health for two years.
He was born in Urbana, Ohio, the son of Lloyd and Gladys Faulkner. He married Mildred (Kesler) Sherer in Argos on December 3, 1965. He enjoyed his family, horses, fishing, woodworking, dancing, Big Band music, cards, bowling, and previously was a member on the Argos Town Board.
Herman is survived by his five step-children, Jerry Sherer and wife, Shirley, of Indianapolis, Margie (Sherer) Buschman and husband, Dennis, of Reynolds, Becky (Sherer) Hossler and husband, Fred, of Wisconsin, formerly of Warsaw, Jo Ann (Sherer) Alexander and husband, Doug, of Dyer and Devon Sherer and wife, Carmelita, of Cicero. He is also survived by 17 Grandchildren, 22 Great-Grandchildren, and by two sisters, both from Ohio.
He was preceded in death by his parents, one sister, one brother and two grandsons.
Friends are invited to visit with Herman’s family and share memories of his life on Monday, February 25, 2008 from 5 to 8 p.m., and on Tuesday, February 26th, after 7:00 a.m., at the Johnson-Danielson Funeral Home, 1100 N. Michigan St., Plymouth.
Funeral services for Herman will be held at 11:00 a.m. on Tuesday in the funeral home. The Rev. Robert J. Vale of the Argos United Methodist Church, will officiate.
Burial will be in Maple Grove Cemetery, Argos, Indiana.
Memorial gifts may be given in Herman’s name to the Center for Hospice and Palliative Care, Inc.