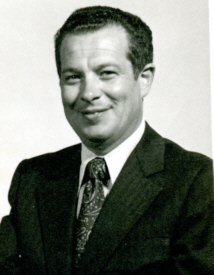 Hilton J. Swain, 79, passed away in his Cherrywood Avenue home with his loving wife and family by his side at 2:03 p.m. on Sunday, November 16, 2014.
Born on September 18, 1935 in South Bend, Indiana, Hilton was the son of Hilton Paul and Mary Hortense (Keller) Swain. He was a member of the last graduating class from Central Catholic, now the old St. Joseph High School, in 1953. A year after graduation, Hilton joined the U.S. Navy and served for four years until his Honorable discharge in 1958. He then attended the Graduate School of Banking in Wisconsin and the University of Wisconsin, and graduated with his banking degree.
On August 10, 1957 in Mishawaka, Indiana Hilton took the former Susan A. “Susie” Shaffer to be his wife. The couple just celebrated 57 wonderful years together this past August.
Hilton worked for First National Bank in Mishawaka, for 1st Source Bank in Plymouth and at the Marshall County Bank and Trust, a career that would span 25 years. He also from 1990-2000, was a car salesman for the Oliver-Ford dealership in Plymouth. He would officially retire in 2000.
Hilton and Susie were members of St. Michael’s Catholic Church in Plymouth. Hilton was a member of the Eagles, the American Legion Post 27, the VFW Post 1162, and the Knights of Columbus, Council 1975 in Plymouth.
In his down time, Hilton enjoyed fishing with his children and family memories made with his children and grandchildren. He was a longtime supporter of Plymouth athletics, a huge Notre Dame fan as well as a lifelong Colts and White Sox fan.
Hilton is survived by his loving wife, Susie of Plymouth and their children: Mary Janet Swain of Mishawaka, Michael J. (Michelle) Swain of Mishawaka, Daniel H. (Janet) Swain of Granger, IN, Andrew E. (Angie) Swain of Nappanee, IN, Paul A. (Debbie) Swain of Oak Harbor, WA, and Elizabeth M. (Gregg) Stanton of Plymouth. Also surviving are 17 grandchildren, 6 great grandchildren and his sister, Mary Alice Hupp of Mishawaka.
He was preceded in death by his parents and brother, Paul Swain.
Visitation will be from 4 – 8 p.m. on Wednesday, November 19, 2014 in the Johnson-Danielson Funeral Home, 1100 N. Michigan Street, Plymouth. A rosary will be recited at 7:30 p.m.
Mass of Christian Burial will be at 11 a.m. on Thursday, November 20, 2014 in St. Michael’s Catholic Church, 611 N. Center Street, Plymouth, with Fr. John S. Korscmar, C.S.C. officiating. Military Honors will be provided by members of the American Legion Post 27, Veterans of Foreign Wars- Marshall County Post 1162 and D.A.V.
A luncheon to celebrate the life of Hilton Swain will immediately follow at the Knights of Columbus Hall, located at 901 E. Jefferson St. in Plymouth.
Memorial contributions can be made to Center for Hospice Care 112 S. Center St. Plymouth IN 46563 or St. Michael’s School, 612 N. Center Street, Plymouth, IN 46563.
A private burial will take place in St. Michael Cemetery.