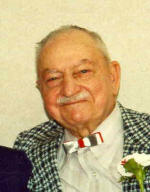 Homer “Shorty” Forest Riddle, 28 days shy of his 94th birthday, died, following an illness, at 1:40 p.m. on Monday, April 1, 2002 , in South Bend ’s Hospice House A lifetime Marshall County resident, living in West Twp. for many years and most recently residing at 816 E. LaPorte St. , Plymouth , Shorty was a homespun philosopher who loved to visit with people. Short in stature, he was tall in character. Shorty carried a business card: one side read, “Wholesale Distributor of Smiles and Sunshine….in Business 90 years.” On the reverse side was written: “Homer Riddle, He can’t play the fiddle. He can’t Sing a Song, He will Tell a Joke or Two, Make you Smile All Day Long.” And he did. Always lighthearted, he would on occasion call himself, “Pierre”, and probably would have taken great delight in passing from this life on April Fool’s Day. Born in Argos , Ind. , on April 29, 1908 , Shorty was the son of George W. V. and Lorinda Weissert Riddle. He graduated from West High School in 1927. His last two years, he drove a school bus. It took some stretchin,’ he said, to reach the pedals; he could barely see over the steering wheel, but otherwise, had he not done the driving, he’d have had to walk to school. Shorty drove the bus to basketball games too. He said in an interview, “I’d go around, pick up the players, play in the game and drive them home.” He played every position in the game. Anything and everything…except dirty. Only played dirty once,” he divulged. “We were in a game where the refereeing was just plain out awful. Teammate, Jess Garrison looked at me and said he’d had enough of it. I agreed. We took out our opponents, one man at a time and never got called on it.” Last year Shorty was honored as the oldest living and most faithful West High School alumna. He also had received two citations as an “Honorary Sheriff” for many years of service patrolling the dangerous curve of road by West High School . “One was” he said, “from Sheriff Harvey Phillips for helping people before help got there.” The second was from former Sheriff Ed Criswell. When the five Plymouth firemen were lost in a tragic accident, Shorty directed traffic for five hours while NIPSCO installed new poles and the wreckers pulled out the pumper truck from the swamp. On April 24, 1947 , Shorty and Ellen A. Smith Gangloff were married in Plymouth . He was four days shy of being 40 years old. “Smartest thing I ever did,” he said. Ellen died August 8, 1987 . He also was the groundskeeper at the Plymouth Country Club for 12 years. Shorty retired from the McCord Corp. in 1973, after 32 years of service. Prior to that, he worked at many jobs, enjoying them all. He cut corn and ran shredders on farms; was an electroplater, plating radio shelters for Studebaker; he hauled gravel at Tyner and worked at the H.J. Heinz plant. Nobody was a stranger to Shorty. “I’m a talker,” he said. “I could have been a preacher. Or a lawyer.” He enjoyed good Gospel preaching and attended the Jordon Church in Argos and houses of worship at Pretty Lake and Inwood. A proficient hunter, trapper and fisherman, Shorty hunted from Maine to Wyoming . He had a green thumb and always had a garden producing an abundance of beautiful flowers and vegetables. In addition to the many friends who will miss his booming voice that needed no amplification, “ have a good day,” and “ the best in the world is not too good for us!,” Shorty is survived by a daughter, Rebecca K. Atkins, Plymouth; a son, E. Allen Riddle, Sarasota, Florida, and two step-children: Jim W. Gangloff of Plymouth, and SuzAnne Gangloff Lintz of Edwardsburg, Mich. and a daughter-in-law, Rebecca Gangloff of Plymouth. Shorty has many grandchildren and great grandchildren from his combined family. Several nieces and nephews also survive his death. Shorty was preceded in death by his spouse, a step-son, Raymond Gangloff, three brothers and six sisters. Visitation with the family and a celebration of his life will be held from 3 to 8 p.m. on Friday, April 5, 2002, at the Johnson-Danielson Funeral Home, 1100 N. Michigan St., Plymouth. Funeral services for Shorty will be in the funeral home at 10:30 a.m. on Saturday, April 6, 2002. The Rev. Mike Dixon, pastor of the Inwood Methodist Church will officiate. Burial will be in Oakhill Cemetery, Plymouth. Memorial gifts in Shorty’s memory may be made to the Marshall County Hospice or to the Nature Conservancy.