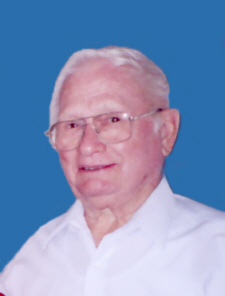 Howard Edward Bauman, 86, died of natural causes in Memorial Hospital, South Bend, at 5:59 p.m. on Tuesday, July 15, 2008.
Born in Star City, Ind., on March 8, 1922, Howard was the son of Michael and Mary Herrick Bauman.
He graduated from Lincoln High School in Plymouth with the class of 1941, and served his country as an Engineer in the United States Army during WWII from 1942 to 1946.
On Nov. 14, 1948, in the parsonage of the First United Methodist Church, Plymouth, Howard took as his bride, Ellen Jeanne Fall. Rev. Blake, then pastor of the church, officiated.
Howard was an ironworker with Local Union 292, retiring in 1984.
He made tools with his welding outfit and fashioned toy trucks, tractors and vehicle of all kinds and enjoyed playing with his creations.
He was a member of the American Legion Post 27 and the VFW Post 1162.
Howard is survived by Jeanne, his wife of almost sixty years and by their daughter, Kelly Pitcher, Indianapolis, Ind.
Two brothers and four sisters also survive. They are: Lawrence Bauman, South Bend, Ind.: Robert Bauman, Argos, Ind.: Lois (Art) Morrill, Argos, Ind.: Doris (Dean) Anders, Niles, Mich.: Alice (Amos) Pearson, Plymouth, Ind.: and Joan Faust, Florida.
Several nieces and nephews survive as well.
Howard was preceded in death by his parents, a sister, Ellen (John) Rosenbaum and a son Michael Bauman.
The family will welcome friends to celebrate Howard’s life on Saturday, July 19, 2008, from 10 a.m. to noon at the Johnson-Danielson Funeral Home, 1110 N. Michigan St., Plymouth.
Funeral services for Howard will follow visitation in the funeral home at noon. Funeral services will be officiated by the VFW.
Memorial gifts in Howard’s memory may be given to the Marshall County Humane Society.