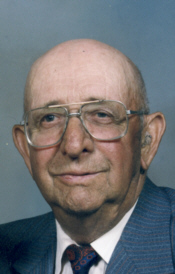 Howard E. “Bob” Schafer, 95, a lifetime area resident, died at 6:18 a.m. on Wednesday, November 4, 2009 at the Community Hospital of Bremen.
Howard was born on January 13, 1914, the second oldest of eight children of Elton P. and Pearl Baughman Schafer. At birth, Howard only weighed 3lbs. 10oz. His mother kept him on the oven door to keep his tiny little body warm. At age 16, he only weighed 65 lbs.
He grew up on a farm on Osborne Road in Lakeville, and quit school in the 8th grade to help with the family farm.
On June 24, 1939, Howard and Nina C. Albert were married in South Bend.
They bought their farm, where they still reside today, on October 14, 1940.
Besides farming, Howard also worked at the mint marsh, at the LaPaz elevator, drove school bus for Lapaz schools for 12 years, and was on the Marshall County ASCS Committee for over 20 years.
A hog farmer, Howard still enjoyed having hogs on the farm that his grandson takes care of. He was a charter member of the Marshall County Pork Producers, helping with their fund raisers, and also helped for many years at the Marshall County 4-H Fair.
Howard is survived by Nina, his wife of 70 years, two daughters: Janet Gottlieb of Hobart and Connie Ullery of Bremen, four grandchildren, nine great grandchildren and one great-great grandson.
Also surviving are a brother, Lyle Schafer of California, two sisters-in-law: Val June Schafer and Dorothy Schafer, both of Lakeville, and several nieces and nephews.
He was preceded in death by his parents, Four brothers: Ralph, Glenn, Roy and Charles Schafer and two sisters: Mildred Hayes and Mary Baughman.
The family will receive friends from 4 – 8 p.m. on Friday, November 6th in the Johnson-Danielson Funeral Home, 1100 N. Michigan St., Plymouth. Calling will continue after 9:00 a.m. until time of services at 10:00 a.m. on Saturday, November 7th in the Plymouth Missionary Church, 1350 E. Jefferson St., where he was a member, officiated by the Rev. Patrick Puglisi.
Burial will follow in Bremen Cemetery.
Memorial gifts in Howard’s name may be given to the Marshall County 4-H Fair Board c/o Marshall Co. Cooperative Extension Office 112 W. Jefferson St. Plymouth, Indiana 46563.