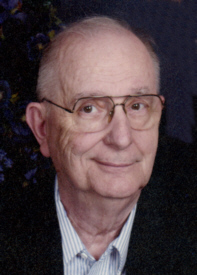 Longtime educator and businessman, Howard K. Menser, 85, passed away early Wednesday morning, November 5, 2014 at the St. Joseph Regional Medical Center, Mishawaka.
A lifetime Marshall County resident, Howard was born on May 6, 1929 in Plymouth, the son of Jesse and Esther (Wright) Menser. He graduated from Plymouth High School with the Class of 1948 and from Ball State University with an Education Degree in 1952. He taught in the Plymouth School’s Industrial Arts Department and Junior High Math from 1955-1958.
Howard honorably served his country in the U.S. Army from 1952-1954. He was also an instructor at West Point.
On August 11, 1957, in Lafayette, Indiana, Howard would take Phyllis A. Short to be in his wife. They experienced many things together while raising their two sons, Howard Jr. and Jerry along with operating Menser Industries for nearly 30 years, a successful manufacturing plant which provided draperies for the manufactured housing industry. Howard was also a brilliant inventor of industrial equipment which led him to hold six U.S. patents and was presented the Prestigious E.R. 100 Award for his “Hydrodynamic Pressure Saturator”, which was displayed at the Museum of Science & Industry in Chicago in 1987. Howard was a member of the American Legion Post 27, a past Charter President for the Plymouth Jaycee’s, a former Republican County Chairman, and a member of the First United Church of Christ in Plymouth.
He is survived by his wife of 57 years, Phyllis of Plymouth, and their sons: Howard K. (Karen) Menser Jr. of Crestwood, KY and their children, Howard Keith III and Whitney L. Menser, and Jerry D. (Frances) Menser of Elkhart and their daughters, Allison E. (Todd) Brubaker and Nicole L. (Ryan) Gray and their daughter Gracelynn. Siblings; Barbara A. Pentelow of Plymouth and Marjorie Kowaleski of Plymouth survive along with many nieces and nephews.
Howard was preceded in death by his parents, two brothers Harry L. Menser and Bud Menser and a sister Emma Lou Bollenbacher.
Calling will be from 4 – 6 on Sunday, November 9, 2014 in the Johnson-Danielson Funeral Home, 1100 N. Michigan Street, Plymouth.
Funeral Services will be held at 10:30 a.m. on Monday, November 10, 2014 in the funeral home with Rev. AnnMarie Kneebone officiating.
Burial will be in the New Oakhill Cemetery with Military Honors provided by members of the American Legion Post 27, Veterans of Foreign Wars- Marshall County Post 1162 and D.A.V.
Memorial contributions can be made to the First United Church of Christ 321 N. Center Street, Plymouth, IN 46563, The Children’s Library at Menominee School 815 Discovery Lane, Plymouth, IN 46563 or Heartland Artists 103 W. LaPorte Street, Plymouth, IN 46563.