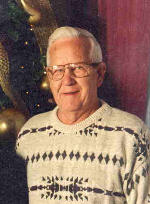 Howard P. “John” Weedling, Jr., 67, a Plymouth resident most of his life, died, at 5:39 a.m. on Sunday, June 2, 2002 , having been diagnosed with cancer this past year. John died at his residence, 402 E. Adams St., Plymouth . His death is under investigation by the Marshall County Coroner. He was born in Plymouth on Oct. 21, 1934 , the son of Howard P., Sr., and Nellie Eloise Eaton Weedling. A graduate of Plymouth High School with the class of 1952, John served in the Army National Guard from 1955 to 1961. On Nov. 28, 1953 , in Plymouth , he and Sandra K. Craig were married. Sandra died a little over two years ago, on May 20, 2000. He used to say of himself that he was “a barber by trade.” He had his own shop, John’s Barber Shop, and cut hair over a period of 25 years. He also worked for R & J Manufacturing a division of Hoosier Racing Tires. John loved speed. He enjoyed NASCAR racing. He raced stock cars at the Plymouth Speedway and participated in the Demo Derby and in motorcycle racing. He also enjoyed camping with his young family and hunting and fishing in the local lakes, particularly, Cook Lake .
He had been a member of the First United Church of Christ. John is survived by a son and three daughters. His son is: Jeff L. and Shirley Weedling, Mooresville , Ind. His daughters are: Terry L. and Roger Keller, Argos , Barb J. Biggs, of Lapaz and Kimberly K. and James Van Overberghe, North Liberty . Thirteen grandchildren and seven great-grandchildren also survive. Clayton Thomas, John’s step-father of Lapaz, and Shirley and Bill Sweeten, a sister, of Donley , Texas , survive as well. John was preceded in death by his parents, his spouse, and an infant sister, Carol Jean. Visitation with the family will be from 4 to 8 p.m. on Wednesday, June 5, 2002 , in the Johnson-Danielson Funeral Home, 1100 N. Michigan St. , Plymouth . Funeral services will be in the funeral home on Thursday, June 6, 2002 , at 11 a.m. The Rev. Charles Krieg will officiate. Burial will be in New Oakhill Cemetery , Plymouth . Memorial gifts may be made to the Marshall County Hospice.