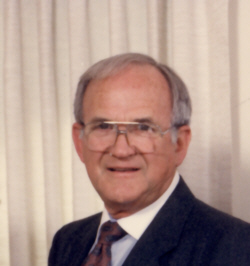 Howard “Smokie” Stutzman, 82, 3633 15th Road, Bourbon, died at 9:30 p.m. on Saturday, July 5, 2008, in the Pilgrim Manor Care Center, Plymouth.
Smokie was born at home on November 10, 1925, in Leesburg, Ind., the next –to-youngest son of the 13 children of David D. and Ida Hostettler Stutzman.
The nine boys and four girls grew up on a 140-acre farm near Nappanee. Raised in a strict Amish family, the family spoke low-German. Smokie once said that they went to school to learn how to speak English.
None of the 13 Stutzman children remained in the Amish community, but Smokie agreed that they all learned value that permeated their lives.
Smokie lived in this area all of his life except for the 12 years he spent in Texas.
Of the entire family, only Smokie and an older sister graduated from high school. He earned his diploma while he was in the Navy.
Smokie had served his country in the United States Navy during WWII from Nov. 9, 1943 until May 3, 1946.
On Nov. 10, 1947, in Plymouth’s First United Church of Christ, Smokie and Patricia “Patty” Witham were married. From that day forward they did everything together.
They raised three children, served as longtime managers of the Plymouth Country Club, they owned and operated a Kentucky Fried Chicken in Texas from 1966 to 1977 and Patty’s Party Pack in Plymouth from 1985 to 1993.
Smokie was a respected and talented realtor for 16 years, retiring in 2000. Married for 59 years, Patty died on August 27, 2006. He was a member of the Plymouth Country Club, the Moose Lodge, the Plymouth VFW and Bourbon’s American Legion.
Smokie is survived by their children: a daughter, Rexalea Warren of Plymouth, and a son, Samuel Witham(Lori) Stutzman of Bourbon, along with five grandchildren: Christopher “Scooter” Warren and Jennifer Warren, both of Plymouth, Schuyler (Julie) Stutzman of Fort Wayne, Lindsay Stutzman and Savannah Stutzman, both of Bourbon.
A sister, Barbara Swift, also survives.
Uncle Smokie leaves behind numerous nieces and nephews.
Smokie was preceded in death by his beloved wife, his parents, a son, Bill, and eleven brothers and sisters: Jonas, Issac, Dan, Marvin, Joe, Eli, Delbert and Alvin, Alice, Alma and Sara.
The family will receive friends from 4 to 8 p.m. on Wednesday, July 9, 2008, at the Johnson-Danielson Funeral Home, 1100 N. Michigan St., Plymouth.
Funeral services for Smokie will be held at 2:00 pm on Thursday, July 10, 2008, with 1 hour of calling prior in the church where he was a member, the First United Church of Christ, 321 N. Center St., Plymouth, with Pastor Steve Voelker, and Rev. Dr. Ronald Liechty officiating.
Burial will be in New Oakhill Cemetery, Plymouth.
Memorial gifts in Smokie’s name may be made to the Center for Hospice and Palliative Care.