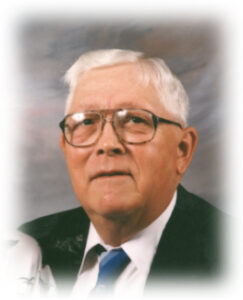 Howard A “Tony” Thomas, 83, a lifetime resident of Plymouth, died at his residence on 11th Road, Plymouth, at 8 a.m. on Friday, April 27, 2007.
Tony was born in Plymouth, the son of William A. and Viola Berger Thomas, on April 3, 1924. He graduated from Plymouth High School.
On May 20, 1943, Tony was inducted into the United States Army at Fort Benjamin Harrison.
A carbine expert, he served in Northern France, the Ardennes, the Rhineland and Central Europe. He earned an American Theater ribbon, a EAME Theater ribbon with four bonze stars, a Good conduct ribbon and a World War II victory medal.
He was discharged on December 31, 1945.
On January 2, 1947, at Divine Heart Seminary in Donaldson, Tony and Mary Bottorff were married. Mary died on June 19, 2002.
Tony, a talented carpenter and painter, had worked with Phil Peer and Kent Reese before becoming self-employed.
Family, Church, and work were Tony’s life. He enjoyed people, had a great sense of humor and enjoyed gardening. He is survived by two sons and three daughters. They are: Paul (Veronica) Thomas and Michael Thomas, both of Plymouth: Annette (Barry) Thomas-Jones of Bremen, Teresa (Donald) Campbell of Argos and Victoria Thomas of Plymouth.
Five grandchildren, two great-grandchildren, a sister, Dorothy O. Thomas of Plymouth and three brothers survive as well. They are: Donald (Edith) Thomas, Washington.; Frank (Martha) Thomas, Warsaw, Indiana, and Gerald Thomas, Plymouth.
Tony was preceded in death by his wife, Mary, his parents, Viola and William Thomas and by two sisters: Irene Thomas and Mable Heflick.
Friends will be welcomed to celebrate Tony’s life with his the family on Monday, April 30, 2007, from 4 to 8 p.m. and Tuesday after 7 a.m. in the Johnson-Danielson Funeral Home, 1100 N. Michigan St., Plymouth.
A rosary will be prayed Monday evening at 8:00 p.m. A Mass of the Resurrection will be held for Tony at St. Michael’s Roman Catholic Church, where he was a member, at 10 a.m. on May 1, 2007. The Rev. Father William Kummer will officiate.
Interment will be in New Oakhill Cemetery, Plymouth, Indiana.
Memorial gifts in Tony’s memory may be made to St. Michael’s Roman Catholic Church or School, or the Center for Hospice & Palliative Care, Plymouth.