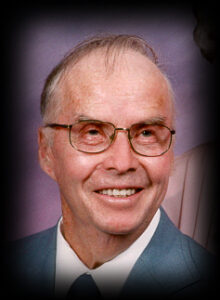 Lifetime Marshall County resident, Hugh Ancil Quivey, 80, 6950 Michigan Road, died of natural causes in Saint Joseph Regional Medical Center, Plymouth, at 8:51 p.m. on Friday, May 21, 2004.
Hugh was a dairy farmer all of his life. He was known statewide as one of the outstanding Holstein breeders.
Hugh was born on December 20, 1923, to Clarence and Nellie Irwin Quivey at the family farm in Green Township. He was the youngest of seven children. He graduated from Culver High School in 1941, and attended agricultural and dairy courses at Purdue University.
He met Eileen Mae Rogers in 1944, at the Rural Youth Club in Marshall County where he became the first president and she, the first secretary. The couple was married on June 15, 1946, in the Poplar Grove Church.
He was active in county, state and national Holstein organizations. He was a member and on the Board of Directors of the Marshall County Dairy Association and a charter member of the Marshiana Holstein club.
A Union-North School Board member for six years, he was president for two.
Hugh was an active member of the Trinity United Methodist Church for over 50 years, singing in the choir and serving as trustee. He was president of the board when the educational unit was built in 1959.
A 4-H leader for over 30 years and a member of the County 4-H Council, he raised sheep, quarter horses and Clydesdales horses as a hobby.
A sports enthusiast, Hugh enjoyed Purdue University athletics as well as the Chicago Cubs. He liked jigsaw puzzles, trees and wildlife.
Hugh is survived by Eileen, his wife of nearly 58 years and by their four children, two sons and two daughters.
His sons are Jan A. Quivey, Culver, and Dale D. Quivey, Merrillville, Ind. His daughters and their spouses are Diana L. and Tom Cook, Elkhart and Marilyn K. and Vincent Terew, Lizton, Ind.
Eight grandchildren also survive. They are: Jan’s children, Matthew and Jessica Quivey; Dale’s children, Brent, Marissa and Carson; Diana’s daughter, Candace and Marilyn’s sons, Michael and Christopher.
Several nieces and nephews survive as well.
Hugh was preceded in death by his parents and four brothers: Albert, Glen, Ronald and Virgil Quivey. A sister, Mary Alice Lannon has also died as had an infant sister, Rose Quivey.
A celebration of Hugh’s life and the sharing of memories will be held from 4 to 8 p.m. on Tuesday, May 25, 2004, in the Johnson-Danielson Funeral Home, 1100 N. Michigan St., Plymouth. Additional calling will be for one hour prior to services on Wednesday in the church.
Funeral services on Wednesday, May 26, 2004, will take place at 11 a.m. in the Trinity United Methodist Church, 425 S. Michigan St., Plymouth. The Rev. William Kaster, pastor of the church, will officiate.
Interment will be in New Oakhill Cemetery, Plymouth.
The family requests that memorial gifts in Hugh’s memory be made to the church elevator fund at Trinity United Methodist Church.