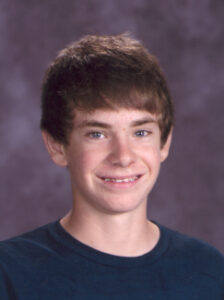 Hunter James Brandt, 16, of 12183 Lupine Lane, Plymouth, went to be with his Lord and Savior at 8:54 p.m., Thursday, June 28, 2012. He was born the son of James ‘Ian’ and Terri (Zieman) Brandt on October 20, 1995 in Fairmont, MN. He was a junior at Plymouth High School and would have graduated with the Class of 2014. He enjoyed being a member of the Golf Team and absolutely loved Stage Crew.
Hunter also enjoyed spending two summers helping his brother at his shop Mr. Spiffy in Sioux Falls, South Dakota. He also worked for Pioneer Seed as a de-tasseler and just recently took employment with the Duke of Oil in Plymouth.
He was very gifted with engines, and love spending time, often with his dad, working on his 1974 Datsun 260Z. Hunter enjoyed spending time fishing with his friends and he was always hanging out with his best friend Cody. Never known to be shy, Hunter had many friends.
Hunter was a member of the Plymouth Wesleyan Church, where three years ago he knew he was ready to receive the Lord, and asked to be baptized. He is survived by his parents, a twin sister; Emmelyn C. Brandt, at home; a brother Camaron M. & Michelle Marlow and their children Hannah and Charlie of Sioux Falls, South Dakota; a sister; Caley E. Marlow of Algona, Iowa; and his dog Jack.
Also surviving are maternal grandparents Linda & Richard Page of Ogden, UT and Gerald & Georgia Zieman of Eagle Point, OR; paternal grandparents Marvin Brandt of Remsen, Iowa and Robert Bachmann of Crystal Lake, Iowa; numerous aunts, uncles, cousins, and friends survive as well.
He was preceded in death by a paternal grandma Diana Bachmann.
A Community Celebration of Life service in union with the Cody Poczik Family will be held on Monday evening July 2nd at 7 p.m. in the Plymouth Wesleyan Church, 11203 S. Michigan St. Plymouth. Services will be led by Pastors Oliver Dongell and Ed Friberg. Seating will begin at 6 p.m. At the church after the ceremony the Brandt family will offer a receiving line. In lieu of flowers the family asks that a contribution be made to the P.H.S. Drama Department ï¿½ Stage Crew, 1 Big Red Drive, Plymouth, IN 46563