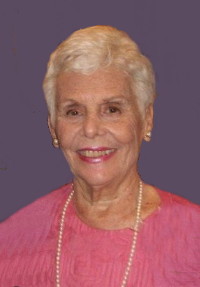 Ida Hardin Chipman, beloved wife, sister, mother and Momma Do, (lovingly called by her Grandchildren) passed away peacefully with her family near on Monday evening, February 3, 2020 at Miller’s Assisted Living in Plymouth.
Ida Bell began her life in Norfolk, Virginia on February 28, 1930, the daughter of Jonathan Jaben Hardin II and Doris (Bell) Hardin. She graduated from Maury High School with the Class of 1948 and went on to attend Queens University and the University of Maryland to pursue her interest in journalism.
On June 24, 1950, Ida married her US Naval Academy Midshipman, Eugene N. Chipman, in Norfolk, Virginia. Ida was the first Norfolk girl to model for Woodbury Facial Soap in the early 1950s, and their spectacular wedding was published in the July 1951 McCall’s magazine. Ida was and will always be Eugene’s “My Bride, Forever”.
As a Naval military family, the Chipman’s moved several times before finally making Plymouth their lifelong home for over 58 years. While raising their children, Ida was a hands-on and affectionate mother; putting her husband’s law career and children’s needs before hers. Ida would coach baseball games if “Chip” was tied up in court, and never missed a sporting event of any of her kids and all of the “south siders” that grew up playing basketball or football in their front yard on Michigan Street. For years, Ida would make holiday dinner plates for Miss Katie Garn to show her children the importance of being a kind neighbor. And each Christmas season, Ida’s southern rum fruit cakes were made with love and delivered to neighbors and friends. It was not unusual to have a new-in-town lawyer stay with them on Michigan Street and she opened their home numerous times as emergency foster parents.
It wasn’t until their children were in high school, college or married that she truly blossomed in pursuing her journalism interests. She managed two campaigns for Governor Otis Bowen while running to swim meets and football games. Ida was personally responsible for the highly successful Republican State campaign “The Spirit of 66”, writing the words to that song and recorded by the Sahara’s a popular Plymouth teenage band. They and a group of teen “go-go” dancers toured the entire State of Indiana by bus that summer and won an award for creativity. She was instrumental in creating the Plymouth Summer Basketball League in the late 1970’s which she was Director of for 11 years. During this time, she also created the Mustard Seed Restaurant in Plymouth, and ran the Natural Food Co-op from her own home. And in 1972, Ida received The Sagamore of the Wabash Award, the highest honor given in Indiana by Governor Otis Bowen.
Ida was a prolific and an award-winning writer, beginning at age 65. She won 27 Honeycomb Awards from the Indiana Women’s Press Club, with 19 of those stories based on people from Marshall County. Her work was also published in the book Chicken Soup for the Soul. Ida wrote interesting stories about local people for the South Bend Tribune, Plymouth Pilot, and Culver Citizen newspapers. She was also deeply proud of the hundreds of obituaries she wrote for Johnson-Danielson Funeral Home in Plymouth because she believed that “everyone had unique life stories that deserved to be told for their families.”
A determined and proud southern woman, Ida loved Jesus, family, friends, Republican politics and a good card game. She was a Master level bridge player, loved gin rummy, duplicate bridge, and poker with the “south side crew.” She loved watching college basketball and followed Plymouth High School sports for years. She sat and watched PHS Pilgrim Basketball games, cheering on Coach Jack Edison and his teams while keeping personal stats of players for herself. And wherever Peyton Manning went, so did Ida. From the Colts to the Broncos, she stayed a fan. And she spoiled their family dogs as much as she spoiled her grandchildren. So we write our Mom’s, our “Momma Do’s”, and “My Bride Forever’s” final chapter. She will be forever remembered as a fierce, strong, and kind role model to her daughters and granddaughters. She was a forward thinker with politics and stood next to “her Chip” and her son as they ran for numerous county and state political positions. But her greatest moments were with her grandchildren who were the light of her life, and where her kind and strong spirit can be seen in each one of them. Ida is survived by her husband of 69 wonderful years, Eugene of Plymouth and their children: Susan (Ron) Nichter of Carmel, IN, E. Nelson (Susan) Chipman Jr. of Plymouth, Bryant Chipman Sr. of Clearwater, FL and Kelsey (Tom) Flynn of Plymouth; her brother, Jonathon “Jim” Hardin of Plymouth; grandchildren: Jared (Ashley) Nichter, Hannah Nichter, Eugene Nelson “Chip” Chipman III, Mary Elizabeth (Ryan) Purcell, Maria (Tim) Stopulos, Bryant Chipman Jr., Aaron Chipman, Christina (Timothy) Eddy Jr., Katie (Mike) Friedman, Thomas (Annie) Flynn and Daniel Flynn; former daughter-in-laws Maggie M. Chipman, and Laura D. Chipman, 8 great-grandchildren, with a ninth expected in March; and many nieces and nephews.
Ida was preceded in death by her parents; her in-laws; grandchildren, Jenna and Benjamin Nichter; sister-in-laws, Mary Lou Hardin and special friend Carolyn McClure, and Esther Chipman, and brother in law, Albert Chipman
Friends may visit and celebrate Ida’s life with her family from 2-4 p.m. on Wednesday, February 12, 2020 at the Johnson-Danielson Funeral Home, 1100 N. Michigan Street, Plymouth. A Memorial Service will begin at 4 p.m. with Life Celebrant James Smart officiating.
The Chipman Family would like to give a special THANK YOU to the Staff of Miller’s Assisted Living in Plymouth, Ida’s care givers Rhonda Miller, LeAnne Andert, and the Center for Hospice Care in Plymouth for their enduring love and care of “his Bride” and our Mom during this journey. In lieu of flowers, memorial contributions can be made to Center for Hospice Care, 112 S. Center St. Plymouth, IN 46563 or The REES Theatre Project, 2680 Miller Dr. Suite 120, Plymouth, IN 46563.