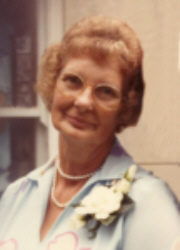 Ida Lou Scher, 88, passed away in her home at 3:20 a.m. on Saturday, October 12, 2013 at Liberty, Kentucky.
The daughter of John and Opal Smith Miller, she was born in Bourbon, Indiana on February 2, 1925. She graduated from Plymouth High School. She joined the Women’s Army Corp. in 1945 and worked as a clerk during WWII.
Ida married Jacob T. Scher on July 20, 1946 in Walters, Oklahoma. In 1955 the couple and their family moved to Illinois. There she was a member of the American Legion Ladies Auxiliary and of the United Methodist Church. She also worked in a grocery store, owned by their good friends the Costello’s. Jacob’s job caused him to travel a lot, and Ida took over many household duties. But she was a natural homemaker. Ida enjoyed quilting, sewing, crocheting and was a great seamstress. She handmade all of her children’s clothes growing up. She was a fabulous cook and liked to can. She also collected bears, of all kinds. They family traveled all over the states together.
Ida is survived by her husband, Jacob, and their children: Margaret Whitney of Liberty, KY, John Scher of Normal, IL, Barbara Hassan of Morganton, NC, Jerry Scher of Sylacauga, AL, James Scher of Liberty, KY and Janet Whitney of Birmingham, AL. She has 8 grandchildren and 22 great-grandchildren.
Her surviving siblings are: Virginia Block of Liberty Mills, IN, Marshall Miller of Silsbee, TX and Orland Miller of Camas, WA.
She was preceded in death by her parents and siblings: John, Edison and Robert Miller and Katherine Crum.
A funeral service will be held on Thursday, October 17, 2013, at 12 p.m. EDT, at NEW OAK HILL CEMETERY CHAPEL, in Plymouth, Ind. with Rev. Ed Friberg officiating. Visitation will be held from 11 a.m. until the time of service at the chapel. Burial will follow in the New Oakhill Cemetery. JOHNSON-DANIELSON FUNERAL HOME, Plymouth is in charge of local arrangements.
In lieu of flowers, memorial contributions can be made to the Hospice of Lake Cumberland, 100 Parkway Drive, Somerset, KY 42503.