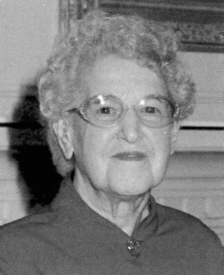 Ilo Wolff Matchett, 92, died of congestive heart failure in the Epworth Villa Life Care Retirement Home, Oklahoma City, Okla., on Tuesday, June 10, 2008. She was a benefactor and supporter of the Purdue College of Consumer and Family Sciences and served 39 years as the administrator for the University of Chicago Medical Center Food Service. Her vision and contributions made possible projects that would have otherwise been impossible.
Ilo frequently participated as a subject in their clinical studies and was an inspiration for healthy lifestyles: choir, square dancing and walking each day are only a few of the good lifestyle choices she made in retirement.
She practiced what the department preached.
Ilo was inducted into the Food and Nutrition Hall of Fame at Purdue University on May 1, 2008.
Born on February 7, 1916, on a farm close to Tyner, Ind., Ilo was the daughter of Carl and Emma Wolff. She always enjoyed being outside with her Dad. At the age of 10, she was driving horses for cutting and loading hay, later driving tractors for combining and doing many other jobs on the farm.
Her first experience in acting was at 10-years-old with the Tyner Christian Endeavor group in the comedy drama entitled, “the Camouflage of Shirley.” The performance was in the Telekamp Hall. Ilo attended both the Tyner grade and high schools. She was a member of the girl’s basketball team and took part in the Junior and Senior class plays and the operetta.
English literature was required in her senior year and her sister, Caroline, was the teacher. Neil Chase, who had been her classmate for 12 years, said that at a surprise party on her 18th birthday, “that was the first time I had seen her speechless.”
She graduated with 30 other students from Tyner High School and spent one year at Indiana Central College. She earned her Bachelor of Science degree in Institutional Management in 1940 from Purdue University.
One of her co-workers introduced her to attorney Hugh M. Matchett. On May 12, 1956, at the University of Chicago, she and Hugh were married in the small Thorndike Hilton Memorial Chapel. Hugh died on April 12, 1995.
During their marriage, Ilo and Hugh enjoyed traveling and exploring new territory together.
An active woman, she was involved with the Chicago Art Institute, the Chicago Symphony and the Lincoln Park Zoo. One of her main interests was family genealogy.
She was a member of the United Methodist Church.
In October of 2000, Ilo moved from Chicago to Epworth Villa Life Care Retirement Home in Stillwater, Okla., in order to be closer to a nephew.
Ilo is survived by a niece and two nephews. They are: Karen (Don) Wood, Nampa, ID.: Dean (Francine) Thompson, St. Louis, Mo. and David (Janet) Thompson, Stillwater, Ok.
Also surviving are several grand-nephews and nieces: Suzanne (Kevin) Parsons: Devin (Holly) Thompson: Darin Thompson, Colleen Thompson, Nathan Wood and Jeremy Wood.
She was preceded in death by her husband, Hugh and a sister, Caroline Thompson.
Funeral services for Ilo were held earlier at Epworth Villa Chapel in Oklahoma City, Ok.
Memorial services will be at 11 a.m. on Saturday, July 12, 2008, at the United Methodist Church in Tyner, Ind.
The Johnson-Danielson Funeral Home, 1100 N. Michigan St., Plymouth, is assisting the family with arrangements.
Ilo’s cousin, the Rev. Paul Nye, pastor of the First Presbyterian Church, Plymouth, and the Rev. Mike Dixon, pastor of the Tyner United Methodist Church, will officiate.
Graveside rites will follow in the Tyner Cemetery, Tyner, Ind.
Memorial gifts in Ilo’s memory may be given to the Tyner United Methodist Church.