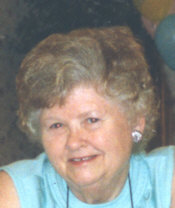 Imogene Davenport-McKesson, 79, affectionately known as “Spud,” died of natural causes in Saint Joseph Regional Medical Center, Plymouth, at 10:10 a.m. on Wednesday, October 20, 2004. A Walkerton area resident most of her life, she lived at 14442 W. 1st Rd., Plymouth, Ind.
She was born the daughter of Noble and Ruth Wells Lemmons in Vincennes,Ind., on December 20, 1924. From the age of 10, she was raised as a daughter by Foster and Ora Davenport. A graduate of LaPaz High School with the class of 1942, She also took business courses in Fort Wayne, Ind.
On January 5, 1946, in Fort Wayne, Imogene and Leon W. McKesson were married. Leon died February 23, 2002.
Imogene worked at Howe Met Corporation in LaPorte. She was a mold maker for airplane parts and retired from her job in 1982.
She enjoyed fishing. She was an avid mushroom hunter and enjoyed watching and feeding the birds. She was very active in her church, the Walkerton United Methodist Church.
Imogene is survived by a brother, Foster Lee and Joy Davenport, Plymouth, and a sister, Doris Patterson, Avon Park, Florida.
Several nieces and nephews survive as well.
She was preceded in death by her parents and by Foster and Ora Davenport. A brother, Don L. Davenport, has also died.
Visitation with the family to celebrate her life will be in the Johnson-Danielson Funeral Home, 1100 N. Michigan St., Plymouth, on Sunday, October 24, 2004 from 4 to 7 p.m. and at the Walkerton United Methodist Church, 1000 Georgia St, Walkerton, for one hour prior to services on Monday.
Funeral services for Imogene, officiated by Rev. James Evans, will be at 10:00 a.m. on Monday, October 25, 2004, in the Walkerton United Methodist Church.
Burial will be in the Woodlawn Cemetery, Walkerton, Ind.
Memorial gifts in memory of Imogene may be made to the Walkerton United Methodist Church.