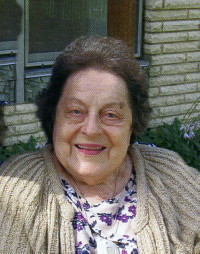 Irene A. Sayer, 96, passed away at 8:50 p.m. on Wednesday, March 18, 2020 at Catherine Kasper Life Center, Donaldson, Indiana.
Born in Chicago, Illinois, Irene was the daughter of Vincent and Victoria (Gawlik) Urbanik.
Irene married Joseph G. Sayer in Chicago on June 4, 1950. They lived most of their married life in Oak Lawn, Illinois. Following Irene’s father’s death they welcomed her mother into their home. Irene was very dedicated to her mother’s care. In 1979, after Joe retired, they moved to Rolling Prairie, Indiana. Joe died in 1982 and she and her mom carried on until her mother’s death in 1987.
Irene’s Catholic faith was always very important to her. She was an active member of Sacred Heart Church in LaPorte until her move to the Kasper Home in 2016. For years she attended daily mass, was in the choir, a member of the Altar Rosary Society and served as a Eucharistic Minister. Irene was a wonderful homemaker. She loved to cook and entertain friends and family. After Joe died, she became the cook at the Sacred Heart Church rectory and enjoyed having someone to cook for once again. Even though she had none of her own, Irene loved children. Irene also loved bird watching and animals. She always had a pet who she adored, most recently her beloved cat Muffy.
Irene had a sweet tooth, never skipping her desert or passing up an opportunity for a bowl of peppermint ice cream or a piece of Fannie May candy.
Irene had a deep faith and, even though initially the change was very difficult, she grew to love her many new friends and the activities at the Catherine Kasper Life Center. She was happy to be able to attend daily mass again and meet with others each day to recite the rosary. She never missed an opportunity to say thank you to anyone who assisted her. Irene is survived by her nieces and nephews: Dolores (Mitch) Wieczorek of Florida, Theodore Konaszewski of Florida, Terry (Sam) Madonia of Illinois, Sandy (Dave) Anthony of Illinois, Dawn (Tom) Pietrusynski of Tennessee, Jerome (Nita) Myszkowski of California, William (Pat) Myszkowski of Illinois and Donna (Ron) Sikorski of Plymouth.
She was preceded in death by her parents, husband Joe, and siblings: Chester (Veronica) Urbanik, Marie (Ted) Konaszewski, and Rich (Jean) Urbanik.
Private services will be held and burial will be in the Resurrection Cemetery in Justice, Illinois.
Memorial contributions can be made to the Poor Handmaids of Jesus Christ, PO Box 1, Donaldson, IN 46513.