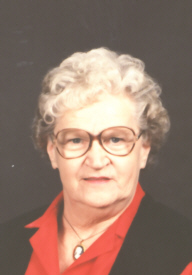 Irene M. Butler, 87, of 400 ½ S. Fifth St., Plymouth, died following an illness at 11:55 p.m. on Thursday, April 10, 2008, in Miller’s Merry Manor, Plymouth. She had been a patient there for the past month..
Irene had lived in Plymouth for the past 43 years, having moved here in 1965 from South Beloit, Ill.
When she was able, you could always count on her to help other people… and animals and was a big supporter of the Marshall County Humane Society.
She was born in Sault St. Marie, Mich., the daughter of William J. and Martha C. (Logan) Kirkpatrick, on July 5, 1920. She graduated from Sault St. Marie High School in 1939.
On Sept. 26, 1941, in McCarron, Mich., Irene and Cecil B. Butler were married. Cecil died on April 3, 1986.
Irene was a longtime cook at Plymouth High School. She retired in 1987, and for the next 16 years was a cheerful and friendly greeter at K-Mart.
The loves of her life were her grandchildren and great-grandchildren with which she spent a great deal of time.
Irene enjoyed crochet and was talented in all kinds of arts and crafts.
A member of the First United Methodist Church, Plymouth, she was active in the Ladies Guild.
Irene is survived by a daughter and three sons. Her daughter is Malva I. (John) Fear, Argos, Ind., and her surviving sons are: Benjamin C. Butler, Flag Staff, Ariz.: Frank D. (Phyllis) Butler, Walkerton, Ind.: and Bruce W. (Kathie) Butler, Mulvane, Kan. Pre-ceding in death was a son Calvin R. Butler who leaves behind children: Chayne, Kelly and Chris.
A total of eleven grandchildren, six step-grandchildren and many, many great-grandchildren survive.
Irene was preceded in death by her husband, son, five brothers and three sisters.
Friends are invited to celebrate the life of Irene M. Butler on Sunday, April 13, 2008, from 1 to 3 p.m. in the Johnson-Danielson Funeral Home, 1100 N. Michigan St., Plymouth.
Funeral services for Irene will follow visitation in the funeral home. The Rev. Dr. Dean Fager, pastor of the First United Methodist Church, will officiate.
Burial will be in Memorial Gardens, New Oakhill Cemetery, Plymouth.
Memorial gifts in Irene’s memory may be made to the Marshall County Humane Society.