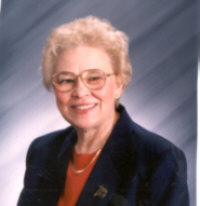 Irene Thornburg, 73, a Plymouth resident since she was 14-years-old, coming from Chicago, died at 11:30 a.m. in the Catherine Kasper Life Center, Donaldson, Ind., on Wednesday, September 22, 2004. Irene had fought a courageous battle with cancer.
She was born, the daughter of Samuel and Eva Klymus Sobinski, in Chicago, Ill., on October 8, 1930. She graduated from West High School in 1948 as the salutatorian of her class.
On June 26, 1949, Irene and James O. Thornburg were married in Plymouth.
A trusted and respected real estate broker since 1982, she first worked with the Probst Realty Agency and then, in 1988, joined Masterson & Associates Realty. She was a member of the National Association of Realtors and the North Central Association of Realtors. Irene also taught Real Estate sales and broker classes at Ancilla College for five years. She was an administrative assistant at the Plymouth High School for ten years.
Irene liked to sew, knit and was an avid reader. She enjoyed the country, flowers and traveling. She valued her many friendships, social functions and family traditions. She appreciated music and the arts, and in her younger years, she enjoyed singing.
Her devoted husband, children and grandchildren were the lights of her life.
Irene had been a member of the Marshall County Friend to Friend organization and a volunteer chaplain at Saint Joseph Regional Medical Center, Plymouth. She was the Precinct 7 Democrat chairperson for many years, serving her party and her country.
Irene is survived by Jim, her husband of 55 years, who was dedicated to her and her care. Two daughters, a son and nine grandchildren also survive.
They are: Nancy J. Martin, Valparaiso, Ind., and her children: Stephanie and Dennis Johnson, Terre Haute, IN; and Julia and Rev. J.J. Hosch of Gary, IN.
Carol and Mark Jeffirs, Plymouth, and their children: Amelia, Nathaniel, Benjamin, Timothy, Abigail and Alexandra.
Mark J. and Julie Thornburg, Zionsville, IN, and their son, Maxwell.
Six great- grandchildren also survive.
Irene was preceded in death by her parents, a son, John E. Thornburg, who died on January 1, 1979, and a brother, John Daniel Sobinski.
Friends will be welcomed to celebrate Irene’s life with her family on Sunday, September 26, 2004, from 3 to 7 p.m. at the Johnson-Danielson Funeral Home, 1100 N. Michigan St., Plymouth.
Funeral services will be held at 11:00 a.m. on Monday, September 27, 2004, in the Church of the Brethren, 1130 N. Michigan St., Plymouth, where Irene had been a member since 1966. The Revs. David Kerkove, pastor of the church, and her grandson-in-law, the Rev. J. J. Hosch, will officiate.
Interment will be in New Oakhill Cemetery, Plymouth.
Memorials in Irene’s memory may be made to the Marshall County Cancer Society, the American Red Cross or the Plymouth Church of the Brethren.