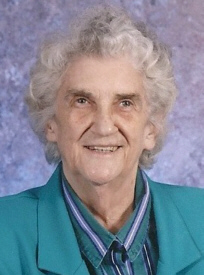 Iris Gerlea Jenney, 86, passed away in Memorial Hospital, South Bend, at 6:20 p.m. on Saturday, March 2, 2013. She has been a Plymouth resident of Miller’s Assisted Living since 2009 coming from Ames, Iowa. Born in Redwood, VA., on March 29, 1926, Iris was the daughter of Phil Titus and Annie Elizabeth (Chitwood) Dudley.
She graduated from Callaway High School in Callaway, VA. with the class of 1944 and from Washington Bible College in 1954 after attending part time for her degree for eleven years.
Before her marriage and the birth of her children, for 17 years, she worked for the State and Treasury Departments in Washington DC.
On June 25, 1960, in the Grace Baptist Church Washington, DC, Iris became the bride of Edwin W. Jenney. The couple moved to Ames, Iowa in 1961 where they became active in Campus Baptist Church and community. There she and her husband Edwin started and maintained the church library. They were the church librarians until 2005. She enjoyed teaching Sunday School to children in the first through third grades and junior high youth.
Iris found joy working with missions and was a strong volunteer and supporter of the Republican Party. A homemaker and avid reader she particularly enjoyed being with her sons and their families.
Following their move to Plymouth, Iris attended the First Baptist Church in Argos.
Iris is survived by her two sons, Edwin W. Jenney, Jr., Flint, MI, and James A. (Cindy) Jenney, Argos, IN. and eight grandchildren. They are: grandsons; Joshua Jenney, Caleb Jenney, Kyle Jenney, Chance Jenney, Dalton Jenney and Blaine Jenney. Two granddaughters include: Alishia Foster and Amber Jenney together with two great-grandchildren, Alek Foster and Josiah Foster.
A brother, Glynn Dudley, Rocky Mt., VA. and a step-brother, Johnny Brooks, Redwood, VA. survive as well.
Iris was preceded in death by her parents, her husband and two sisters, three brothers and a step-brother. They are Martha Crook and Lorraine Dowdy, Phillip T. Dudley, Lynn D. Dudley, Walter T. Dudley and Milton Brooks. Visitation will be on Wednesday, March 6th from 4:30 – 6:30 p.m. in the Johnson-Danielson Funeral Home, 1100 N. Michigan St., Plymouth.
Funeral services will follow visitation in the funeral home at 6:30 p.m., the Rev. Robert Mace, pastor of the First Baptist Church in Argos will preside.
Interment will be next to her beloved husband, Edwin, in New Oakhill Cemetery.
Memorial donations may be made to the First Baptist Church, 11525 SR 10, Argos, IN 46501.