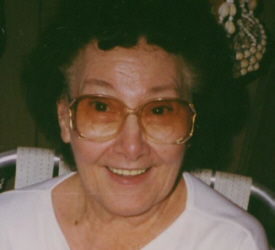 Iris M. Gildner, 80, of 418 Charles St. Plymouth, for the past 38 years, died of natural causes at 7:30 p.m. on Thursday, October 18, 2012.
Iris was born in the Twin Lakes area of Marshall County on February 16, 1932. She was the daughter of Ralph Adam and Dorothy Belle (Johnson) Shafer.
A 1950 graduate of Argos High School, she was married to Dewey S. Gildner on December 25, 1951 in Argos. Dewey died on December 28, 1991.
Iris had worked as a retail clerk for J.C. Penney for 11 ½ years, retiring in 1995.
She was a member of the Sunrise Chapel in Plymouth, teaching Sunday School for two and three-year olds for many years. She was a Pink Lady at the old Parkview Hospital for over 20 years and collected and banked T.V. rental money for the hospital for two years and scheduled working hours for the Pink Ladies for several more years.
She said that she always enjoyed traveling, playing games on Sunday afternoons as well as reading her Bible faithfully.
She was preceded in death by her parents and husband and son-in-law, Danny Stahl.
Iris is survived by two daughters and a son and daughter-in-law. Her daughters are Dana L. Stahl, Plymouth and Paula J. Hoover, Michigan City, IN. Her son David and Wendy Gildner live in Plymouth.
Six grandchildren also survive. They are: Ashley Gildner, Zachary Gildner, Angel Gildner, Bobbie Hoover, Susie Hoover and Jesse Hoover.
Four great-grandchildren survive as well, they are: Abby Hoover, Jonathan Hoover, Mark Hoover and Ashton Newell.
A brother, Ralph LaVein Shafer of Colorado Springs and a brother and sister-in-law, Harry (Diana) Gildner of Plymouth also survive.
Visitation will be held Sunday, October 21, 2012, from 2:00 to 5:00 p.m. in the Johnson-Danielson Funeral Home, 1100 North Michigan St., Plymouth.
Funeral services will be held on Monday, October 22, 2012, at 10 a.m. in the Sunrise Chapel, 11802 Lincoln Hwy., Plymouth, with calling for one hour prior in the church. The Rev. Mark Allen, pastor of the church, will officiate.
Interment will be in New Oakhill Cemetery.
Memorial contributions may be made to the donor’s choice in Iris’ memory.