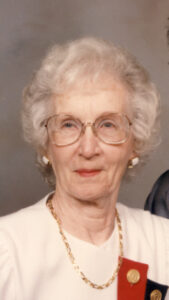 Isabel M. Emmons, 92, a North Oak Road resident in Plymouth since 1951, died at 11 p.m. on Thursday, August 16, 2012, in the Michiana Health and Rehabilitation Center, Mishawaka, Indiana.
Isabel was born on May 5, 1920, in Nappanee, Ind., the daughter of Aaron L. and Rebecca Fleck Moore.
She graduated from Nappanee High School with the class of 1938.
On September 28, 1940, Isabel and Ernest E. Emmons were married in Nappanee. Ernest passed on September 11, 2004, after 64 wonderful years together.
Isabel was the secretary for the Union-North School Corporation for 16 years, retiring in 1984.
She was a member of the Blissville Church of the Brethren and a former member of the Women of the Moose Lodge in Plymouth.
Isabel is survived by a son and daughter-in-law, Richard A. and Diane Emmons of Granger, Ind. and two grandchildren and families. They are: Grandson Brian A. and Debra A. Emmons of Zionsville and their children; Justin, Jessica and Peyton. Granddaughter Kristene M. and Robert W. Corbin of Indianapolis and their children; Sierra and Heather. Isabel’s two great-great grandchildren include Isabella and Ellison. She was preceded in death by her parents, her husband a brother, Carlyle Moore, and two sisters; Helen Burger and Betty Rechtenbaugh.
The family will receive friends on Tuesday, August 21st from noon until 2 p.m. in the Johnson-Danielson Funeral Home, 1100 N. Michigan St., Plymouth.
Services for Isabel will be held immediately following visitation at 2 P.M. Tuesday. Pastor Dester Cummins of the Blissville Church of the Brethren will officiate. Burial will follow in the Fair Cemetery, North Liberty, Ind.
Memorial gifts in Isabel’s memory may be made to Blissville Church of the Brethren 6250 Spruce Rd, Plymouth, IN 46563, American Heart Assoc. 7272 Greenville Ave., Dallas, TX 75231 or Parkinson Research Foundation P.O. Box 20256, Sarasota, FL 34276.