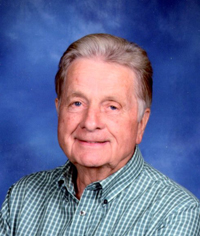 Ivan LeRoy Magnuson, 85, passed away from sudden complications at 10:10 p.m. on Saturday, July 7, 2018 at the Kosciusko Community Hospital in Warsaw.
Ivan was born in Hutchinson, Kansas on January 5, 1933 to Carl and Hattie (Nelson) Magnuson. The family moved to Indiana in 1941. He graduated from LaPaz High School with the class of 1951.
On October 19, 1952, Ivan married Shirley A. Bower. To this union, the couple would have two sons, Terry and Steve.
He worked in South Bend at Curtis Wright Corp. as a tool room machinist. He later went to Nipsco and retired in 1992 as an equipment operator. He volunteered at Charlotte Regional Medical Center with the Heart to Heart support group and in admitting while living in Florida.
Ivan served in the U.S. Navy for 2 years as a machinist aboard a ship during the Korean Conflict and was in the reserves for 6 years. In his later years, he went to Washington D.C. in October of 2016 on a Honor Flight recognizing our nationâ€™s veterans.
In 1966, Ivan and his brother, Ralph, organized the Marshall County ages 10-12 All-Star baseball traveling league which included Argos, Bourbon, Bremen, LaPaz, Plymouth, Mentone, Nappanee and Walkerton. He coached his two sons 4 years at LaPaz. He also served on the North Township Advisory Board for 24 years and he was a member of the First United Methodist Church in Plymouth.
Ivan is survived by his wife, Shirley of Plymouth, and his two sons: Terry (Debbie) Magnuson of Greenwood, IN and Steve (Margaret) Magnuson of Indianapolis, IN; grandchildren: Greg (Laura) Magnuson, Elizabeth (Zachary) Smith, Bradley (Bekah) Magnuson, Nathan Magnuson, Christopher Magnuson, Ivana Magnuson, Joshua Magnuson and Aaron Magnuson; and three great-grandchildren, Julia and Ryan Magnuson and Isaiah Smith.
His siblings include: Cleo (Bob) Shidler of LaPaz, IN, John (Mary) Magnuson of Sebring, FL and Ralph (Treva) Magnuson of Sebring, FL, as well as, sister-in-law, Mary Magnuson of Warsaw.
He was preceded in death by his parents and siblings: Alta Kime, Wanda Lemert, Carl Magnuson Jr. and Norman Magnuson.
Visitation will be held on Friday, July 13, 2018 from 4-7 pm in the Johnson-Danielson Funeral Home, 1100 North Michigan Street, Plymouth, Indiana 46563.
Funeral services will be held at 10:00 am on Saturday, July 14, 2018 in the funeral home. Visitation will resume from 9:00 am until time of service, with Rev. Toni Carmer officiating. Burial will follow in the New Oak Hill Cemetery, Plymouth, with Military Honors provided by members of the American Legion Post 27, Veterans of Foreign War- Marshall County Post 1162 and Disabled American Veteran Chapter 42.
Memorial contributions can be made to the First United Methodist Church, 400 North Michigan Street, Plymouth, Indiana 46563 or the American Heart Association, 6500 Technology Drive, Ste. 100, Indianapolis, Indiana 46278.