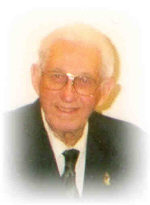 Eighty-nine year old J. Cyrus “Cy” Nifong, a lifetime Marshall County resident, living a 9331 Quince Road, died, following a brief illness, at 3:20 p.m. on Monday, December 23, 2002, in Pilgrim Manor Nursing Home. Cy once said that his family was truly a pioneering family with roots that went back to the Mayflower. “We are however,” he wrote, “primarily a farming family yet public spirited and community minded with interest in this life and life eternal.” A Marshall County Commissioner from 1976 to 1980, Cy worked on the renovation of the Shady Rest County Home and also helped to plan the construction of the present County Building . He was president for many years of the Marshall County 4-H Fair Board, was a director of the Marshall County Rural Electric Membership Corporation and the Bowen Center for Human Services in Warsaw. A grain and dairy farmer, Cy served the West Township school system and the Plymouth Community Schools for 35 years as a bus driver. A member of the church for over 50 years, he helped to save and re-open the Union Church of the Brethren located on State Road 17. For many years, Cy was on the board of trustees, a church chorister and a Sunday School teacher. Born on December 8, 1913, on the farm homesteaded by his great-grandparents, Cyrus, the son of John and Almira Sellers Nifong, started first grade at the Stockman school, east of Plymouth. He was the only boy in his class. He transferred to the Inwood class when the school closed and graduated from Plymouth High School, where he was on the debate team, with the class of 1932. Cy’s first wife, Loretta Jane Harley, became his bride in the Plymouth Church of the Brethren on June 11, 1936. Loretta died on November 14, 1998. On June 12, 1999 , Cy and Grace M. Baker Fisher were married. Grace died on December 22, 2001. Cy is survived by his four sons. They are Loren (Shirley) Nifong, Plymouth; Larry (Sarah) Nifong, Walkerton; Ronald G. (Clare) Nifong, Ft. Wayne; and Ross Nifong, Plymouth. A step-son, Karl R. (Barbara) Matz, McPherson, Kansas, seventeen grandchildren, four step-grandchildren, eleven great-grandchildren and four step-great-grandchildren survive as well. Cy was preceded in death by his parents, his two wives and three brothers: Noble, Truman and Walter Nifong. Three sisters, Ivy Troyer, Vera White and Mae Walterhouse have also died. Friends may visit with the family and share memories from 3 to 8 p.m. on Friday, December 27, 2002, at the Johnson-Danielson Funeral Home, 1100 N. Michigan St., Plymouth. Visitation will also be held at the church one hour prior to services on Saturday. Funeral services for Cy Nifong will be held at 11 a.m. on Saturday, December 28, 2002, in the Union Church of the Brethren, 10483 State Road 17, Plymouth. The Rev. Deb Peterson, pastor of the Union Church will officiate. Burial will be in New Oakhill Cemetery, Plymouth. Memorial gifts in Cy’s memory may be made to the Union Church or to a charity of the donor’s choice.