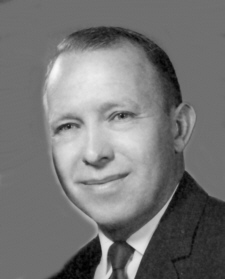 Jack A. Harman, 89, died of natural causes at 4:10 a.m. on Saturday, October 11, 2008, in Miller’s Merry Manor, Plymouth. He had moved to Plymouth in 1929 when he was 10-years-old.
His favorite activity was being with his family.
Jack was born on September 4, 1919, in Garrett, IN., the son of Mont H. and Helen I. Wood Harman. He graduated from Plymouth High School with the class of 1938.
On June 15, 1941, in Plymouth, Jack and Helen L. Lee were married. Helen died on March 23, 1978.
He served his country as a Pfc. in the United States Army during World War II. He worked at Bendix in South Bend for 14 ½ years and as a purchaser with DelMonte in Plymouth for 14 years, retiring in 1984.
He was a member of the Trinity United Methodist Church, the Plymouth Kilwinning Masonic Lodge 149, F&AM, the Scottish Rite of St. Joseph Valley, the V.F.W., Post 1162, and the Moose Family Lodge, #741.
Jack is survived by two sons: Terry L. (Sherry) Harman and Herbert E. (Ann) Harman, all of Plymouth.
Six grandchildren, 16 great-grandchildren and eight great-great-grandchildren also survive.
He was preceded in death by his parents, his wife and a sister, Mary Webster.
Friends are invited to celebrate the life of Jack Harman on Tuesday, October 14, 2008, from 11 a.m. to 1 p.m. in the Johnson-Danielson Funeral Home, 1100 N. Michigan St., Plymouth, IN.
A Masonic service will be held at 12:30 p.m. Tuesday, in the funeral home.
Funeral services, officiated by the Rev. Kerry O’Brien, pastor of Trinity United Methodist Church, will follow the Masonic service at 1 p.m.
Military honors by the Plymouth American Legion Post 27 and the Plymouth V.F.W. Post 1162, will be conducted graveside in New Oakhill Cemetery.
Memorials in Jack’s memory may be made to the American Heart Association or the Center for Hospice and Palliative Care.