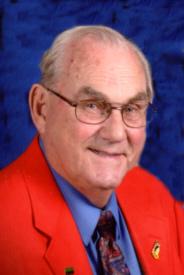 Jack B. Greenlee, 85, a lifetime Marshall County resident, passed away at his Rex Street home in the care of his loving family and the Center for Hospice Care at 8:30 a.m. Monday, March 9, 2015.
Jack was born in Argos, Indiana to Harold A. and Mildred H. (Fikert) Greenlee on April 24, 1929. He attended Plymouth’s Lincoln High School, where he was a member of the football team, held the shot put record until broken by his cousin Bob Greenlee, and played the trumpet in the marching band. He graduated with the Class of 1947. Jack continued his football career into college at Indiana University in Bloomington, playing as a fullback.
He served in the U.S. Army during the Korean Conflict and was honorably discharged on December 12, 1952. Jack was a member of the Plymouth American Legion Post 27 and V.F.W. Marshall County Post 1162.
After a first date to one of Jack’s softball games, Jenny Lee Lentz fell for him and on June 15, 1952 in the First United Methodist Church in Plymouth, she became his bride. The couple have made Trinity United Methodist their church home for many years.
Jack was happy forging a career in the grocery business and he made people happy everyday as he greeted and assisted customers with his friendly trademark smile. Beginning at A&P and Henry’s Serve U in his early years, he worked his way up to manager at G&G Supermarket, where he remained for over 40 years. He also worked at Dave’s Supermarket and Hiatt’s Farm Market.
Scouting was important to Jack and after his time in military service he attained Eagle Scout and later was leader for Troop 257. He received the Soaring Eagle Award in 2012. On December 29, 1999, alongside his brother Jerry, they each received the Sagamore of the Wabash Distinguished Service Award. Jack served on the American Red Cross Board and was a major blood donor who took pride in attaining his nine gallon pin. He also served as chairman of the first Blueberry Festival.
Jack was a lifetime Chicago Cub fan, enjoyed reading and as members of the Plymouth Athletic Boosters, he and Jenny attended many sporting events. In January of 1992, Jack became Mayor and served as Plymouth’s biggest cheerleader. Over the course of eight years he served fairly and moved to establish the Annual Prayer Breakfast and Christmas Parade, with Jack and Jenny playing the part of Mr. and Mrs. Claus. Jack was highly involved in politics for over 21 years; also serving on the county board and city council. Jack recently received the Key to the City.
Most important to Jack remained his family. They are: his wife Jenny of 62 wonderful years and their children: Jill L. Greenlee of Plymouth and her children, Karl (Kayla) Krathwohl, Kile (Andrea) Krathwohl and Katie Ruggles; Janice L. (Mark) Futter of Ft. Wayne and their children Alex Futter and Kelsey Futter; James L. (Tammy) Greenlee of Plymouth and their children Ashley Greenlee and Shana Greenlee; and Julie A. Hartung of Kokomo and son Rhandall. Five great-grandchildren: Nathanial, Marcus, Michael, Mia and Camille also survive. Foreign exchange student (’71-’72) Catherine (Roland) Micallef also survives as a daughter with her family; husband Serge and daughter Laura.
His siblings are Sue (Larry) Chase of Greer, SC, Bill (Ramona) Greenlee of Dayton, OH. Also surviving is his sister-in-law, Jean Greenlee, and several nieces and nephews.
He was preceded in death by his parents and brother Jerry.
Visitation will be from 4-?? p.m. on Saturday, March 14, 2015 in the Johnson-Danielson Funeral Home, 1100 N. Michigan Street, Plymouth.
Funeral services will be held at 2 p.m. on Sunday, March 15, 2015 in the Trinity United Methodist Church, 425 S. Michigan Street, Plymouth, with Pastor Mark Need officiating. Calling will continue at the church at 1 p.m. until time of services.
Burial will be in the New Oakhill Cemetery with Military Honors provided by members of the American Legion Post 27, Veterans of Foreign Wars-Marshall County Post 1162 and the D.A.V To honor Jack’s lifelong career of serving the community in the grocery business, it is preferred that a gift of non-perishable food items be brought to his visitation or a contribution made to assist the needy of our community through the following food pantries… The Bread of Life, The Neighborhood Center or Blessings in a Backpack.