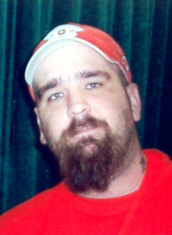 Jack E. â€œButchâ€ Clark II, 41, of 11122 Forest Dr., Plymouth passed away unexpectedly at home of natural causes on Wednesday, March 22, 2017. He has battled Diabetes for the past 8 years.
Butch was born in Kankakee, Illinois on August 28, 1975. He has lived in Plymouth most of his life and is survived by his parents Nancy L. (McHargue) and Kevin L. Ames. He earned his diploma from Plymouth High School in 1994.
He was formerly employed with Prim Door now Modern Door of Walkerton. Butch most recently enjoyed working with his cousin at Tents For Events in Chillicothe, Ohio and became a huge Ohio State Buckeye fan as well as the Chicago Cubs and Bears. He liked golfing at The Rock in Plymouth and always listening to a wide range of music. Above all he was a proud father who supported and loved watching his son Bailey play varsity baseball at PHS.
Butch is survived by his parents, longtime companion Alesha L. Flory and sons; Bailey A. Clark and Kwinten Bunton all of Plymouth. His siblings include Angel Pennington of Bremen, Andrew Clark of Beloit, Wisconsin and Erin Hundt of Plymouth. Butch was fond of his nieces and nephew: Lexie Dean, Rilynn Ames and Ryen Hundt. Special aunts and uncles include: Ruth and Ed Clemons, Charles McHargue, Bud and Dawn McHargue, Dawn and John Sellers, Tina and Don Bunton and Ken and Joan Clark.
Butch was preceded in death by his maternal grandparents: Arnold M. and Margaurite L. (Gaines) McHargue, brother Ken â€œBamâ€ Clark, uncle Tiny McHargue, nephew Austin Dean, cousin Isaiah Sellers and brother-in-law Jason Hundt.
The family will receive friends from 10 a.m. until 11 a.m. on Saturday, March 25th in the Shiloh Wesleyan Church, 10532 4B Road (corner of King & 4B) Plymouth. A memorial service will begin at 11 a.m. in the church with Pastor Richard VanVuren officiating. A luncheon will follow in the Oasis at the church. Burial will be at a later date.
Memorial gifts may be given to the American Diabetes Association or to the Family.