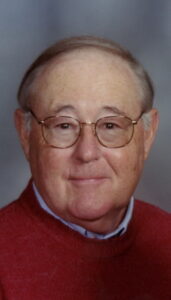 He attended Argos High School graduating with the class of 1949. After graduating from Argos, he attended Hanover College for 1 year and then joined the Air Force. He served for 4 years as a clerk’s typist obtaining the rank of Staff Sergeant.

On June 8, 1958 Jack married Patricia Pifer at Plymouth First United Church of Christ and they would have celebrated their 63rd wedding anniversary. Jack went to work for the Carpenter Insurance Agency in Argos before going to the State Exchange Insurance Agency. He then worked for the State Exchange Bank which became NorCen Bank where he became the Executive Vice President and Senior Loan Officer as well as a member of the Board of Directors. He would retire as a consultant for Lake City Bank.

Jack enjoyed trap shooting, in fact so much so, he taught all of his grandchildren how to trap shoot. He liked to hunt and fish with family and friends and spend time playing with his grandchildren whenever he had the chance. He was an avid photographer often taking photos, printing and matting all the wildlife and mills that he captured through his lens. Jack loved going to Ohio to the Air Force Museum to see the historical planes. He was a member of the Amateur Trapshooting Association, Plymouth Camera Club, Lions Club, Argos American Legion and the First United Church of Christ.

Jack is preceded in death by his parents

Visitation will be held on Saturday, June 12, 2021 from 11-1 pm at the Johnson-Danielson Funeral Home, 1100 N Michigan Street, Plymouth. A memorial service will follow with Rev. Chuck Krieg officiating.

Burial will take place at a later date.

Memorial contributions can be made to the First United Church of Christ, 321 N Center St. Plymouth, IN 46563.