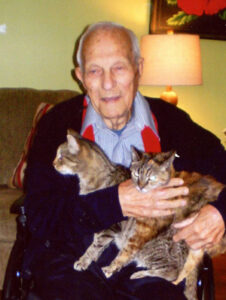 Jacob T. Scher, 95, passed away early Thursday morning, July 27, 2017 in his residence in Sylacauga, AL.
Jacob was born November 8, 1921 in Cotton County, Oklahoma, to the late Jacob and Lillian Christine (Fix) Scher.
He married Ida Lou Miller on July 20, 1946 in Walters, Oklahoma. She preceded him in death on October 12, 2013.
Jacob was baptized in a Baptist church in Walters, Oklahoma.
Jacob had worked for many years at the American Screen Products in Chatsworth, Illinois as an Electrical Engineer.
Jacob is survived by his children; John Scher of Normal, IL, Jerry Scher of Sylacauga, AL, James Scher of Sylacauga, AL, Margaret Whitney of Sylacauga, AL, Barbara Hassan of Sylacauga, AL, and Janet Whitney of Birmingham. Also surviving are seven grandchildren, twenty-two great-grandchildren and three great-great grandchildren.
He was preceded in death by his parents, wife, two brothers and three sisters.
A funeral service will be held on Friday, August 4, 2017 at 12:00 PM at the New Oak Hill Cemetery Chapel, in 1300 Chester Street, Plymouth, Indiana, 46563, with Rev. Ed Friberg officiating. Visitation will be held from 11:00 AM until time of service on Friday at the chapel.
Burial will follow in the New Oak Hill Cemetery.
In Lieu of flowers, memorial contributions can be directed to the Coosa Valley Hospice Care, 315 West Hickory Street, Sylacauga, Alabama, 35150.