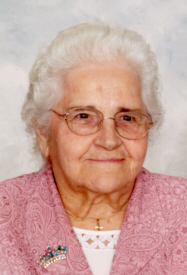 Jacqueline L. Snyder, 89, passed away Monday evening April 11, 2016 with her family near.
Jackie was born in South Bend, Indiana on March 14, 1927 to Ray “Mike” and Nancy (Yoder) Granning. On March 11, 1944 in Crown Pointe, Indiana, Jackie became the bride of Leo Snyder. He would precede her in death in 1978.
She owned and operated J&L Grill in Plymouth from 1959-1972 with her husband. After her husband’s passing, Jackie returned back to school and attained her GED in 1981 and then attended Ancilla College in Donaldson, Indiana to receive her associate’s degree in 1986.
Jackie worked as a receptionist and then in the ER at the St. Joseph Regional Medical Center in Plymouth. She was a lifetime member of the Apostolic Temple in South Bend.
She was a resident of Neidlinger Garden Court for 10 years until going to Pilgrim Manor in 2010.
Jackie is survived by her daughters, Judy Skinner of Plymouth and Nancy Snyder of South Bend, and foster son Don (Janice) Burzloff of Plymouth and his family; grandchildren, Leo M. Smith and Edward Smith Jr.; great-grandchildren, Zach Smith, Arizona Smith and Seth Smith; sister, Marybeth Jaarda of South Bend and brothers, David Granning of Chase, MI and Michael (Judy) Granning of Ft. Wayne.
She was preceded in death by her husband, parents, sister, Joyce Dawson and brother, Owen Granning.
Visitation will be from 11-1 p.m. on Thursday April 14, 2016 in the Johnson-Danielson Funeral Home, 1100 N. Michigan Street, Plymouth, Indiana. Funeral services will immediately follow in the funeral home at 1 p.m. officiated by Bishop Peter Rowe and Pastor Chris Rowe of Apostolic Temple.
Burial will be in the New Oak Hill Cemetery.
Memorial contributions can be made to Apostolic Temple 221 S. Ironwood Drive, South Bend, IN 46613.