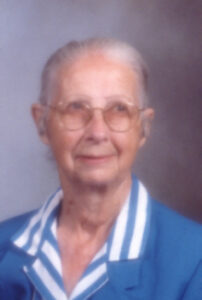 With enduring Faith, Jacqueline M. “Jackie” Berger was received into the arms of her Savior on Saturday morning, September 28th. At the age of 91, Jackie passed away at her home in LaPaz, Indiana a lifetime Marshall County resident.
Jackie was born in Plymouth on September 30, 1921, the only child of Willard O. and Gladys F. (Manuwal) Bienz.
She graduated from Plymouth’s Lincoln High School in 1939. That same year on June 4th in LaPaz, she became the bride of Cletus L. Berger. Together 66 years they enjoyed a spiritually abundant life, were proud parents of five children and dearly loved the generations of family to follow. Cletus preceded her in death on December 2nd 2005.
Her surviving family includes: daughter Lucinda K. and Dale Aukerman of South Bend and their children; Sharon Spurlock, Maria (Mike) Fewell and Kayleen (John) Carr, daughter Pamella A. and James Smith of LaPaz and their children; Douglas (Regina) Jones, Dana (Cindy) BonDurant and Melody BonDurant, son Timothy O. and Susan Berger of South Bend and their son Tony Berger, son Thomas L. and Sandra Berger of South Bend and their sons; Lynn, Jason and David Berger, and son Jefferey A. and Cheryl Berger of Plymouth and sons Andrew Berger and Randy Berger (deceased). Fourteen great-grandchildren and six great-great grandchildren complete the family tree. A family adopted son, Derry Dillion and his wife; Chris survives as well, Warsaw, Indiana
There was no doubt that Jackie was a farm wife and homemaker and enjoyed being so. She also loved her cats and dogs. She later was proud to have received her QMA certification in nursing from Ancilla College and practiced for 26 years. Her church, The United Pentecostal – House of Prayer, also meant everything to her as a 70 plus year member that began with her baptism in The Old Time Religion Tabernacle.
Visitation will be held in her church home, The House of Prayer, located at 12450 Plymouth-Goshen Trail on Tuesday, October 1st from 4 – 8 p.m. Services will be held in the church on Wednesday, October 2nd at 11 a.m. with visitation one hour prior. Pastor Ronald D. Humphrey will preside.
Burial will be in the New Oakhill Cemetery, Plymouth followed by a fellowship meal in the church hall.
Preferred are memorial gifts to the church.