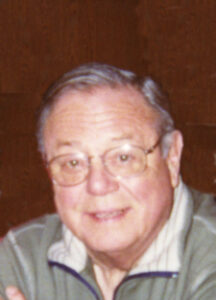 James A. Jardine, 77, of Latonka Trail, Culver, died at 4:45 p.m. on Monday, January 22, 2007, in Saint Joseph Regional Medical Center, Plymouth. Jim had been an area resident since 1974, coming from West Chicago, Illinois.
The son of Zac and Clara Brown Jardine, Jim was born on June 30, 1929 in Madison Wisconsin, Jim was a 1947 graduate of Madison West High School and went on to graduate from the University of Wisconsin with a Degree in Agricultural Engineering.
On October 15, 1949, Jim and Sally Reif were married in Dubuque, Iowa. Sally preceded Jim in death on September 1, 1984.
Jim worked as Plant Manager for Del Monte Foods for many years, retiring in 1989.
An excellent woodworker, Jim had a complete workshop at his house. He also enjoyed fishing, hunting, golfing and bowling.
Jim is survived by a son, James (Jeanne) Jardine of Oswego, Illinois, and five daughters: Laura (James) Wascher of Joliet, Illinois, Sarah Drzemala of Monument, Colorado; Susan Hamman, Nancy (Gene) Wainscott and Jamie Jardine, all of Plymouth, Indiana.
Also surviving are thirteen grandchildren, a great granddaughter and a sister, Muriel (Ron) Von Hatten of Texas.
Friends will be welcomed by the family to celebrate Jim’s life on Thursday, January 25, 2007, from 5 to 8 p.m., and after 7 a.m. on Friday, in the Johnson-Danielson Funeral Home, 1100 N. Michigan St., Plymouth.
Funeral services will be held at 10:00 a.m. on Friday, January 26, 2007 in Johnson-Danielson Funeral Home. The Rev. Charles Krieg of the Salem United Methodist Church, Bremen, will officiate. Burial will follow in New Oakhill Cemetery, Plymouth. Memorial gifts may be made to the family for a Memorial Tree to be planted in Jim’s name.