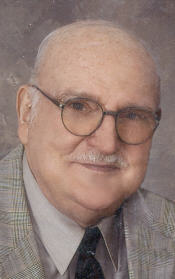 James D. “Jim” Hardy, 73, of 805 Baker St., River Park, Plymouth, died of natural causes at 10:15 a.m. on Friday, April 11, 2003, in Saint Joseph Regional Medical Center, Plymouth.
A devoted family man, Jim enjoyed making wooden toys for his 12 grandchildren and 15 great-grandchildren. He was a great part of their life. He still is. On Monday, when visitation is held at the funeral home Jim will be wearing a boutonniere from his granddaughter’s wedding this past Saturday.
Born in Nokomis, Ill., on November 11, 1929, he was the son of Wesley Wayne and Edna Buchholz Hardy. He graduated from Pana High School, Pana, Ill., in 1947.
Jim and Esther G. Poulos were married in San Bernardino, Calif., on February 25, 1951.
He worked first as a truck driver, then a lineman, and retired as a mechanic for the Del Monte Corp., Plymouth, for 23 years, retiring in 1990.
He loved to fly model airplanes and putting together puzzles. He could build anything and in his wood working shop he made birdhouses, foot stools and, even up to his death, was working on a hobby horse for a great-grandchild.
He and his wife Esther enjoyed riding their two-seater, three-wheeled tricycle through River Park and the adjoining area.
He was a member of REACT and of the Marshall County Civil Defense. In the 1960s when the tornadoes came through, Jim was on the Marshall County Red Cross Disaster team. He also had donated numerous gallons of blood to help others.
Jim is survived by Esther, his wife of 52 years and by their three sons and a daughter, their children and grandchildren.
His sons and their wives are: Ronald D. and Laurie Hardy and Marvin D. and Jodie Hardy, all of Plymouth, and Steven R. and Carla Hardy of Carmel, Ind.
Daughter Yvonne and Jerry Rindfield live in Bremen.
A sister, Evelyn and Ralph Hamell, Syracuse, Ind., and a brother, Donald and Maxine Hardy, Plymouth, survive as well.
Jim was preceded in death by his parents, an infant daughter, Diane Elaine Hardy who died on October 5, 1953, and a sister, Lorene Lockwood and a brother, Jerry Hardy.
Friends may call from 4 to 8 p.m. on Monday, April 14, 2003, at the Johnson-Danielson Funeral Home, 1100 N. Michigan St., Plymouth.
Funeral services conducted by Pastor Wesley Brubaker will be held on Tuesday, April 15, 2003, at 11 a.m. in the funeral home. Burial will be in New Oakhill Cemetery, Plymouth.
Gifts in Jim’s memory may be made to the American Heart Association, Marshall Co. Chapter. or to a charity of the donor’s choice.